Slappy the Dummy from the Goosebumps franchise

The Bensons are the secondary antagonists-turned-supporting characters of the 2019 Disney•Pixar animated film Toy Story 4, acting as loyal servants to Gabby Gabby who serve her in her goal to retrieve Woody's voice box to replace her broken one.

“The dummies are, by far, some of the creepiest characters we've ever created. Our animators really leaned into the truth in materials for how our ventriloquist dummies move. Dummies' bodies are soft with no structure, so our dummies' arms just dangle and their legs bend backwards. Throw in their fixed expressions with their wide eyes and big hinged jaws and they're nightmare material—in the best way possible.”
―Producer Mark Nielsen on the Bensons' creation

The Bensons are a group of ventriloquist dummies who live at the Second Chance Antiques, led by a dummy who wears a red bow tie and work as loyal servants for the talking doll Gabby Gabby, obeying her every command without question.

The red-tied dummy is first seen taking Gabby in her stroller while Woody and Forky were looking for Bo Peep in the store. Then, Woody meets Gabby and Benson and when the doll sees that Woody has a voice box, they coerce Woody and Forky into joining them. Sensing an ulterior motive from Gabby Gabby, Woody flees the shop. Gabby Gabby then sends her dummies to chase them and they manage to capture Forky. The Bensons are then later seen patrolling the shelf, turning their heads around as they guard Gabby Gabby and their captive Forky from intruders.

While Woody with the help of Bo, Buzz Lightyear, Giggle McDimples, Ducky and Bunny, Duke Caboom, and Billy, Goat, and Gruff are trying to recover Forky, the dummies surprise them and Woody nearly got his voice box stolen. The group fails their mission and after an argument with his friends, with Bo being indirectly insulted by Woody's remarks, Woody decides to return to find Forky alone. He then confronts Gabby Gabby and she convinces him to give her his voice box in exchange for Forky, Woody having been moved by Gabby's backstory. Gabby, happy to have a new voice box, keeps his word and makes Forky go to Woody. Forky then greets Gabby Gabby and Benson and points out that he scares him. However, when Harmony, the girl Gabby dreamed of playing so much, did not like her, the doll loses hope and tells Woody (who came back to comfort her) that it was over for her. With Bo, Woody manages to convince her to be with Bonnie. Everyone then leaves the antique shop and the first Benson gives the stroller a boost before entering it. However, the stroller stumbles against a fairground barrier and falls to the ground. A lady then runs to straighten the stroller and sees Benson which makes her scream in terror. The Bensons then are not seen again and it is unknown if the Benson in the stroller was brought back to the antique store.

T-pose render for Benson as portrayed in Disney Sorcerer's Arena.

The Benson hole at Pixar Putt 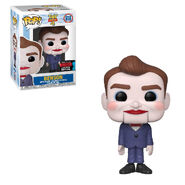