Disney Wiki
Register
Don't have an account?
Sign In
Advertisement
in: Characters, Disney characters, The Santa Clause characters,
and 7 more

Curtis playing music on the job, slackers, not getting things done

“In putting on the suit and entering the sleigh, the wearer waives any and all right to any previous identity, real or implied, and fully accepts the duties and responsibilities of Santa Claus, in perpetuity to which some time the wearer becomes unable to do so, by either accident or design.”
―Bernard

Bernard is an elf and one of the main protagonists from Disney's 1994 film, The Santa Clause and its first sequel.

Bernard is a stickler for getting things done that are necessary. He can tend to be very grumpy, and less cheerful than the other elves, but he acts how he does to keep the other elves working. Being the head-elf (or Arch-elf), he has the responsibility of looking after the workshop and the other elves.

Bernard is first seen watching and smiling as Scott Calvin and his son, Charlie, arrive at the North Pole. Introducing himself as the head elf, Bernard explains that Scott has assumed the duties of Santa Claus by putting on Santa's suit, which he proves by showing a clause written on the former Santa's business card. Though Scott immediately denies this, Bernard explains that Scott will have until Thanksgiving to get his affairs in order before returning to become Santa full-time. Bernard also bonds with Charlie, giving him a snow globe (while also calling him "sport" as Scott does). Charlie thanks Bernard for the snow globe and promises to take good care of it, and Bernard replies with "Make sure you do".

During the year, Scott begins transforming into Santa. At some point, Bernard sends Santa's list to Scott's home address.

Around Thanksgiving, Bernard arrives at the home of Charlie's mother and stepfather, Laura and Neil Miller, where Scott is trying to visit Charlie despite the previous suspension of Scott's visitation rights. By this point, Scott has been inspired by Charlie to become Santa, and Bernard takes them both to the North Pole. Bernard and the other elves help with the preparations for Christmas. However, on Christmas Eve, Scott is arrested on the belief that he kidnapped Charlie. In response, Bernard sends E.L.F.S to rescue him.

After the rescue, Bernard suddenly appears at the Millers, shocking them both, who have accepted Scott as Santa by this time. When Charlie learns he must stay with his mother and stepfather instead of his father, Bernard reveals that the snow globe he gave Charlie will allow him to summon Scott whenever he wants to see him. It is presumed that Bernard returns to the North Pole afterward.

Eight years after the first film, Bernard and his assistant, Curtis, discover a hidden clause that states that Santa must be married before or within the first eight years of assuming the role. If not, then Santa will lose his power, and Christmas will end. Scott returns to his hometown to try to find a wife before the deadline. Meanwhile, Curtis creates a "Toy Santa" to cover for the absence of the real one, against Bernard's wishes, but Bernard reluctantly goes along with it, and tells the other elves that Santa had a makeover, so they won't question Toy Santa's synthetic appearance.

However, Toy Santa finds himself following the handbook too strictly. He insists on double-checking the naughty-nice list, even though Benard insists the Real Santa has already done so, so Toy Santa need not worry about it, but he refuses to listen. Having no grace, or slack in his plastic heart, Toy Santa deems all children of the world naughty just by their minor infractions. As such, he plans on giving everyone nothing but coal for Christmas, going as far as to create an army of life-sized toy soldiers to enforce his orders. At this point, Bernard can't take it any longer, and exposes Toy Santa as a fraud, pleading with the elves to not listen to him, but Toy Santa locks Bernard up, rendering him powerless to do anything more.

Bernard is eventually freed by a returning Scott and helps Scott, Charlie, and Scott's girlfriend, Carol, in stopping Toy Santa.

Bernard does not appear in this film, as due to his actor being in a TV series. His absence goes unmentioned and Curtis is head-elf in his place. It's possible that he either retired from his position as Head Elf or was on a (probably much-needed) furlough at the time of the film and Curtis only assumes his position temporary. Even though he doesn't appear, the novelization uses his character. 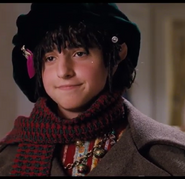 Bernard as the Head elf in The Santa Clause. 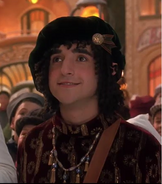 Bernard as the Head elf in The Santa Clause 2.