Kristen Frost De Paula
Bernardo De Paula is an American actor who has starred in shows such as Rescue Me as Jesus Christ and Shameless as Beto. He has also made guest appearances in Castle, CSI: Miami and NCIS. He has also voiced characters in animated films for Blue Sky Studios including Rio, Rio 2, and Ferdinand.

For Disney, he voiced Saltwater Serge in Doc McStuffins and José Carioca in the 2017 reboot of Ducktales. 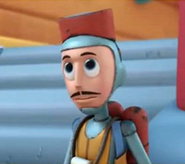 José Carioca
(Ducktales reboot)
Add a photo to this gallery
Retrieved from "https://disney.fandom.com/wiki/Bernardo_De_Paula?oldid=4289539"
Community content is available under CC-BY-SA unless otherwise noted.