Sadness, not doing anything

“Wind's in the east...mist coming in. Like something is brewing, about to begin. Can't put my finger...on what lies in store, but I fear what's to happen all happened before.”
―Bert's famous prediction that Mary Poppins will arrive again

Bert (Herbert Alfred on Sundays, and called The Match Man in the books) is the deuteragonist in Disney's 1964 film, Mary Poppins.

Bert is a jack-of-all-trades with a Cockney accent. He never stays with one trade too long and adapts to current conditions. He is a long time friend of Mary Poppins, though their relationship is noted to be strictly platonic (but there are hints to suggest a more romantic interest between them). He is shown to be very much at ease with her magic and implies that she has helped numerous families using her powers. He is incredibly energetic and easygoing, never losing his temper or raising his voice with anyone at all and always looking on the bright side. However, he shows a deeply empathetic side to his personality when Jane and Michael run from the bank - he expresses his sympathy for their father, George in that he is shaped and pressured immensely by the financial world that has imprisoned him. Nevertheless, he compassionately looks after them until George returns.

Bert is a slender man with dark hair, blue eyes, and fair skin. He usually wears worn-out clothing. While working as a chimney sweep, his face is covered in soot.

While in the street picture of the English countryside, Bert wears a red, orange, and yellow suit with a blue bow tie. He also sports a straw hat.

Bert appears at the beginning of the film, trying to earn money as a one-man-band. After impressing the crowd with various songs, as well as impromptu poetry, he notes a change in the weather, which he notes as a sign of events to come. He then notices the viewer. After being asked, he shows the viewer the route to 17 Cherry Tree Lane, home of the Banks family. Along the way, he introduces the viewer to some of the residents, and is warned by Admiral Boom and Mr. Binnacle, that the Banks' home is dealing with "heavy weather". Upon arrival, he is surprised to hear loud arguing coming from inside.

Later, Bert is shown trying to earn money as a street artist. He has drawn pictures depicting his adventures with Mary Poppins. Soon, she appears along with the Banks children, Jane and Michael, for whom she has been employed as a nanny. They tell him that they are on their way to the park. He scoffs at the mundane outing and is able to successfully goad Mary into transporting them into one of his pictures, a depiction of the English countryside.

While Jane and Michael go to a nearby fair, Bert and Mary enjoy a stroll through the countryside and eat lunch at a small cafe. They talk of their long relationship, which is shown to be platonic. Afterward, they join Jane and Michael for a ride on Mary's private carousel. At her word, the horses jump off, and they enjoy a horseback ride. Along the way, Bert notices a fox running from hunters, and saves it by putting it onto his horse. They end up in a horse race, where they see Mary easily win it. After being asked for a word to describe herself, she tells them of her special word, Supercalifragilisticexpialidocious, and Bert contributes by noting that he used to say it to save his nose from being tweaked by his father for being rude for not speaking. Soon, it begins to rain, which washes off the drawing, and the group is forced to cut the outing short. Though Mary laments the loss of the pictures, Bert notes that are more of them coming soon and that he intends to take advantage of the rain and change businesses by selling hot chestnuts.

Bert appears the next day, at the home of Mary's Uncle Albert, who is "suffering" from a strange sickness. Apparently, he has laughed too much and is floating in the air, unable to come down. Bert warns Jane and Michael not to laugh, as the "disease" is contagious. However, he succumbs to it himself and joins Uncle Albert in the air. After Jane and Michael float as well, Mary allows them to enjoy tea together, by making the table float to join them. Eventually, they float to the ground, due to the sadness at realizing they must go home. Mary asks Bert to stay and keep an eye on Uncle Albert. He attempts to cheer him up with a joke but fails and they both end up sobbing.

After a disastrous bank outing with George, Jane and Michael run away and become lost. They run into Bert, but do not recognize him initially, as he is covered in soot from cleaning chimneys. He helps them to understand that George does not hate them as they fear, and takes them home. At the Banks' home, he is abruptly hired by Winifred to babysit them as it is Mary's day off. He cleans the chimney and allows them to watch. Mary soon returns home after enjoying her day off and warns them of the danger. Just as she speaks, they are drawn up the chimney onto the roof. Bert and Mary follow, and she leads them on an exploration of the rooftops. They run into Bert's chimney sweep friends, and a joyous party breaks out, which eventually ends up at the Banks' home.

After George returns, Bert sics the sweeps away from the property. As he is cleaning up, he talks with George, who confides that he feels that the bank outing was a setup by Mary, and notes that his dreams have seemingly been shattered. Bert sympathizes but implies that George has focused so much on work, that he has ignored the emotional needs of Jane and Michael. Bert apologizes for troubling him and leaves.

Bert is seen at the end of the film selling kites to various bypassers learning the news that George has changed, Jane and Michael are now close to him, and that he has gotten back his briefly lost job at the bank. He sees Mary as she is leaving, and asks her not to stay away too long.

Bert doesn't appear in the sequel, which takes place twenty-five years after the original film, but he is mentioned by Jack, a lamplighter with a similar personality (who uses the same tone as Dick Van Dyke's improvisation as Bert in the original film) to him who reveals to have been apprenticed by him at some point before the events of the sequel. When Mary returns to the Banks' home so she could help Michael with his children, John, Annabel, and Georgie, she asks Jack about Bert, to which he reveals that he is still alive and is now traveling around the world (apparently one of the few to not be affected by the Great Depression).

Bert is a somewhat common character at the Disney theme parks, mostly appearing at Disneyland. Bert appeared as an animatronic figure with Mary in The Great Movie Ride in a scene based on "Chim Chim Cher-ee".

Bert at one of the Disney parks

In The Great Movie Ride

Visual development of Bert and Mary 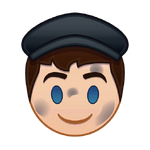