Leon (father)
Wanda Winkle (mother)
Nancy (aunt)
Bertram Winkle is the Ross family's butler. He is disinclined to work and quite sarcastic. He is shown actually doing work, however, only when the Ross parents are visiting.

Bertram is the Ross family's lazy, sarcastic butler, who seems to care very little for the kids and calls them "The Nanny Killers." Even though he rarely shows it, he does have a soft side for them. He doesn't however, seem to like Jessie, though he sometimes gives her advice, not knowing his intentions and mistakes where she is from. It is possible that he cares for her in a brotherly, possibly fatherly way, as he walks Jessie down the aisle on her wedding day. Bertram often takes time for himself and wishes he could quit his job, but doesn't. He spends his time cleaning, reading magazines on the couch, watching TV in the screening room, and eating bacon-wrapped donuts. The Ross kids insult him sometimes, like when he tries to help them. When the Ross parents are home he pays extra attention to his job.

Mrs. Chesterfield is seen flirting in the lobby with Bertram. She smacks his butt and then follows him to the elevator, smiling. Bertram does not return her feelings (Are You Cooler Than a 5th Grader?). In "Romancing the Crone", Bertram asks Mrs. Chesterfield on a date in order for Jessie and Zuri try to get Mrs. Ross's tiara from Mrs. Chesterfield's terrace. 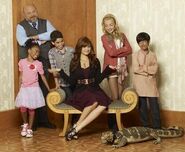