"Bessie & MicroAngelo" is the first segment of the thirty-eighth episode of Amphibia. It aired on April 17, 2021.

Bessie has her work cut out for her when she's tasked with showing MicroAngelo the ropes.

Anne, Marcy and the Plantars are prepping for their trip to the final temple. Hop Pop approaches Bessie with the very important task of looking after MicroAngelo, the snail they picked up back in Newtopia. Hop Pop calls it a big responsibility and tells Bessie to keep an eye out for him. Right away, MicroAngelo gets into trouble by nearly falling down a well, but Bessie rescues him and the two fall asleep. As everyone continues packing, Marcy tells Anne that she needs to change her look and hired a Newtopian fashion expert to come and help her. Anne is frightened as Marcy and Sasha have had a habit of trying to change her look back at home and each time has been a failure and thus is afraid of what Marcy has to offer.

Bessie awakens to discover MicroAngelo gone and right in the way of Frobo chopping wood. She rescues him, but then he is nearly run over by a carriage. Bessie admonishes MicroAngelo, but his baby eyes cause her to lighten up and they happily go back to the stables. The carriage belongs to Bernardo, the fashion expert, who immediately sees Anne in need of new armor. Despite her protests, Marcy leaves her with him while she goes and makes potions. MicroAngelo gets distracted by a tiny beetle and Bessie proceeds to charge through everyone's hard work to try and get him back. Hop Pop stops her and believes that MicroAngelo is too much responsibility for her and locks her up back at the stables, making MicroAngelo feel guilty.

While trying on more armor, Sprig sets off a tiny trebuchet that proceeds to set fire to a string of maps leading to a box of boom shrooms. MicroAngelo spots this and warns Bessie who gives him a bucket of water. However as he rides away, a giant bat creature picks him up. Bessie charges and breaks free of her chain while grabbing the stable door. She uses it as a ramp and rescues MicroAngelo by hitting the bat away, who randomly explodes afterwards, and they put out the fire to everyone's sight, minus Anne who is stuck in some more armor. As Hop Pop congratulates Bessie, Marcy and Sprig remove Anne's armor, only leaving the chest plate, and she takes to her new look which Bernardo describes as minimalist. Bessie and MicroAngelo become closer. 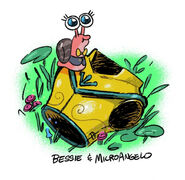 One of Marcy's failed hair designs

Anne finally comfortable about herself 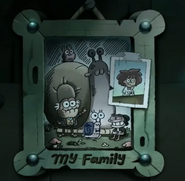