Director of the Global Justice Network

She head of the worldwide espionage organization known as the Global Justice Network (GJ),[4] a parody of Marvel Comics' S.H.I.E.L.D. She is in charge of addressing any threats to the world that fall outside the scope of normal law enforcement groups. However, even an organization with some of the world's finest scientists, weapons, and agents require some help from time to time, and Dr. Director isn't too proud to call in reinforcements if it means the job gets done, which is where Kim Possible comes in. However, being a top-secret organization, even asking for help has to be handled in a subversive way, whether it's sucking Kim into a trap door through a series of transport tubes or arranging a phony crime to lure her to a meeting site. She first introduced Kim to Global Justice in a case that led to Kim's first encounter with Duff Killigan. She later called in Kim to assess the phenomenon GJ scientists dubbed "the Ron Factor"; the basic gist being that Ron's chaotic nature was the real reason for Kim's success saving the world and Dr. Director wanted to see if GJ could harness that chaos. She has subsequently stayed behind the scenes for the most part, although Kim has had other dealings with Global Justice, usually in the form of rides to her destinations and backup on missions.

As the head of a global organisation, Dr. Director has very little hands-on involvement in GJ's cases, but on the rare occasions when she's had to get her hands dirty (such as when she had to team up with Kim to fight her own twin brother, Gemini), she's proven that she can hold her own in a fight. Dr. Director is bound and determined to bring down Gemini and his organization, W.E.E. (the Worldwide Evil Empire). But rather than a war of two tactical geniuses, their battles are really more reminiscent of a kindergarten slap fight, since their conflict is really nothing more than a case of sibling rivalry run amok. In fact, get the two of them in a room together and even Ron would most likely say that he's more mature than either of them.

Dr. Director is instantly recognisable by her eyepatch, reminiscent of the Marvel Comics character, Nick Fury. Gemini wears one too, and his name is another reference to Nick Fury (albeit the original Caucasian version that first appeared in the 1960s), whose brother Jacob became the villain Scorpio. However, it's unclear whether either twin wears it because of an actual eye injury or whether they're just trying to make a fashion statement. 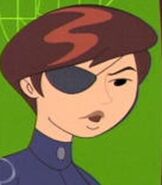