A camp outside Danville

Clyde Flynn (husband), Linda Flynn and Tiana Webber (children), Candace Flynn, Phineas Flynn (grandchildren), Ferb Fletcher (step-grandchild)
Betty Jo Flynn is a recurring character of the popular animated TV show Phineas and Ferb. She is the wife of Clyde Flynn, mother of Linda Flynn, grandmother of Phineas and Candace, and step-grandmother of Ferb. Her first appearance was "Get That Bigfoot Outta My Face!"

Betty Jo Flynn is old, but still a child at heart. Even though she is elderly, she is still very athletic and a great rollerskater. It is possible that she is very competitive.

Betty Jo Flynn was born with her identical twin, Lorraine. They were most likely born in Danville.

Betty Jo was part of the rollerskating derby early in her adult life. Her team, the Tri-State Bombers, almost won, but Hildegard Johnson cheated at last minute causing their team to lose. Ever since then, Betty Jo and Hildegard have been enemies.

When she was a little older she married Clyde Flynn. She gave birth to two young girls, Linda Flynn-Fletcher, and Tiana Weber (née Flynn).

When she became older, her daughter was married to Lawrence Fletcher, and she had three grandchildren: Candace, Phineas, and Ferb. Every year, she invites her grandchildren and their friends to their cabin in the Danville Woods. Once, she visited the Flynn-Fletcher family along with her husband, Clyde. Once Phineas learned about her being in the rollerskating derby, they decided to build a rollerskating rink for a rematch with Betty Jo, Candace, and Ferb against Hildegard, Jeremy, and Suzy Johnson. The results were a tie. They had another rematch, but the results were unseen.

Phineas Flynn and Ferb Fletcher are Betty Jo's grandsons. They are nice to each other, and she knows about their Big Ideas.

Candace is Betty's granddaughter, and she is very helpful. She tried to give Candace advice on enjoying the woods once. When they had the skating rematch, Betty made Candace the lead skater.

Ever since they were young, they were enemies. Betty Jo described Hildegard as a "cheater" while Hildegard called her a "loser". Around 50 years later, they instantly recognized each other. They still hated each other, and had two rematches. The first rematch was a tie, while the second is unknown. 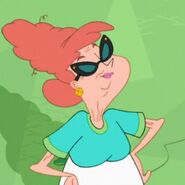 Betty Jo Flynn with her glasses off 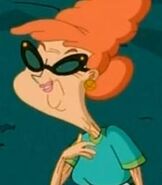