Disney Wiki
Register
Don't have an account?
Sign In
Advertisement
in: Songs, Cinderella songs, House of Mouse songs,
and 5 more

"So This Is Love"

"Bibbidi-Bobbidi-Boo" (which is also called "The Magic Song") is a novelty song, written in 1948 by Al Hoffman, Mack David, and Jerry Livingston. It was introduced in the 1950 Disney animated feature film Cinderella and performed by the Fairy Godmother (Verna Felton). It was nominated for AFI's 100 Years... 100 Songs, as one of 15 from Disney and one of 17 from an animated movie to be nominated. The ones that made the cut include "When You Wish Upon a Star" (#7), "Someday My Prince Will Come" (#19),"Supercalifragilisticexpialidocious" (#36), "Zip-a-Dee-Doo-Dah" (#47), "Beauty and the Beast" (#62), and "Hakuna Matata" (#99).

The song was co-written by Al Hoffman and Jerry Livingston, whose novelty song "Mairzy Doats and Dozey Doats and Liddle Lamzy Divey" served as an inspiration for the song.

Another recording, by Jo Stafford and Gordon MacRae, was released by Capitol Records as catalog number 782. The record first reached the Billboard charts on December 16, 1949, and lasted 7 weeks on the chart, peaking at #19. It was backed with "Echoes" on the flip side.

On the Cash Box Best-Selling Record charts, where all versions were combined, the song reached #7.

This song was included in the Disney's Sing-Along Songs videos "Zip-A-Dee-Doo-Dah" and "Collection of All-Time Favorites: The Magic Years". "Bibbidi-Bobbidi-Boo" was also one of the songs to which Ilene Woods auditioned for Cinderella. In the House of Mouse episode "House of Magic", Jafar and Iago use the famous magic spell to return the House of Mouse after Daisy magically causes it to vanish, and were tricked by Mickey to receive Agrabah as a reward for their good deeds. This song was also featured in the intro to the 1985 video The Walt Disney Comedy and Magic Revue, with clips from films such as Magician Mickey, Return from Witch Mountain, Robin Hood, Mary Poppins, Pete's Dragon, Return to Oz, Clock Cleaners, The Three Caballeros, Pinocchio, Swiss Family Robinson, and Bedknobs and Broomsticks.

The lyrics of the song, as with the title, are composed nearly entirely of gibberish, featuring the title of the song. The 1948 recording, however, has several extra English lines that were not used in the animated film, including: "If your mind is in a dither, and your heart is in a haze, I'll haze your dither, and dither your haze, with a magic phrase", and "if you're chased around by trouble, and followed by a jinx, I'll jinx your trouble, and trouble your jinx, in less than forty winks." The tempo of the various recordings also differs widely.

"Bibbidi-Bobbidi-Boo" was arranged by Yoko Shimomura and used as the field theme for Cinderella's world, Castle of Dreams.

In this version, it was sung by Helena Bonham Carter (who plays the Fairy Godmother). It can be heard during the credits of the film after a cover of "A Dream Is a Wish Your Heart Makes". 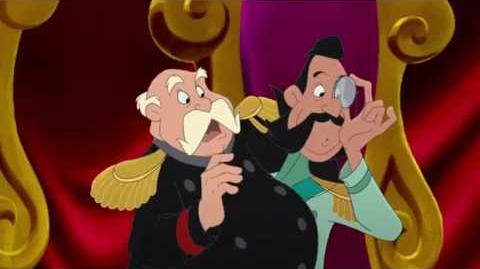