Babyface from the original film

Being loved by Daisy, Barbie and/or Ken, chasing

Being bullied, lied to, and pushed around by Lotso

Strength, rotating his head at irregular angles to see anything behind him

Big Baby is one of the secondary antagonists of Disney/Pixar's 2010 animated film Toy Story 3. Hence his name, he is a very big baby doll, about the size of an actual baby. He was once one of Daisy's toys before he, Lotso, and Chuckles were lost, and came to Sunnyside Daycare.

Big Baby, along with Lotso and Chuckles, was once owned by a young girl named Daisy, as was revealed to Woody by Chuckles himself. Among them all, Lotso was the most special to her. One day, during a break at a rest stop, she was playing with her toys when she stopped to have some lunch, after which she fell asleep and forgot them there. They waited day in and day out for her to return to them, but on one rainy day, they decided to make the journey back to her house when she didn't come back for them; however, upon arriving, Lotso glimpsed through the window at her playing with another Lotso. Angered that she had replaced him, he then convinced Big Baby that they all had been replaced and that she no longer loved him and intimidated Chuckles into remaining silent about the truth.

They then hitched a ride on the back of a Pizza Planet truck before being thrown off by a bump in the road and landing in front of Sunnyside Daycare, which Lotso proceeded to take over using Big Baby as his enforcer, due to his considerable size in comparison to the other toys.

"Your little one will love this baby doll with her soft, cuddly fabric body and vinyl arms, legs, and face. With dazzling blue eyes that open and close, this realistic baby encourages nurturing play. Eighteen inches tall, she comes dressed in an adorable yellow onesie with matching bonnet, and has her own magical bottle of milk that disappears while she drinks! A perfect first doll for your special child. Machine washable on gentle cycle. Flame retardant."

He was Lotso's right-handed henchman, thus making his third in command (if one ignores Ken who is second in command). He is a loyal follower to Lotso, obeying his orders when he tells him to restrain Buzz Lightyear after he escapes from the Caterpillar Room and to throw Mr. Potato Head into "The Box" and shutting him in twice. When Woody brings up Daisy and throws the pendant to him, he says, "Mama" which shows that he still loves his old owner after realizing that she still loves him. After Lotso smashes the pendant that Daisy gave him and angrily jabs him in his stomach, Big Baby finally loses his loyalty to Lotso and retaliates by throwing Lotso into the dumpster, finally having had enough of his lies and abuse. During the credits, he is seen living a happier life at Sunnyside under the care of Barbie and Ken. He is silent; he only communicates with baby sounds (except for one line "Mama?" near the film's climax).

Big Baby is a big and strong baby doll, arguably around the size of a real human baby, with a broken eye that hangs loose. With that being said, he is the biggest and strongest toy at Sunnyside Daycare. He carries a bottle of milk around and is adorned with childlike scribbles that resemble tattoos.

Big Baby is first introduced while Lotso is leading Andy's toys to the Caterpillar Room, where the bear assigns them to. Later that evening, after the toys experience a rather rough playtime with the toddlers, Buzz emerges out of the Caterpillar Room and follows some of Lotso's henchmen into their secret hideout, the Vending Machine, where he eavesdrops on the gathered group, but is caught in the act by Big Baby, who throws him into sight of the group. That night, when Andy's toys are imprisoned in the Caterpillar Room, Big Baby separates Mr. Potato Head from the other toys by imprisoning him in a sandbox. The next night, Big Baby stands as a guard while Ken and a reset Buzz (who now serves as one of Lotso's helpers) take roll call to make sure that all the toys are there, then the three walk off to capture Mr. Potato Head after discovering a real potato inside his cell. Once again, Big Baby imprisons Mr. Potato Head in the sandbox outside after Mr. Potato Head kicks Ken in the shin, though this is revealed to all be part of the toys' escape plan.

During the escape, while Big Baby is rocking slowly on a swing and looking up at the night sky, Woody, Buzz (who has now been set to his Spanish mode by the toys by accident), and the other toys across the playground sneak past as they make their way to the garbage chute (the only escape route that the Chatter Telephone has told Woody about) Woody, Bullseye, and Aliens get separated from the others when one of the patrolling trucks approaches them and sneak past Big Baby but they accidentally get Big Baby's attention when one of the Aliens falls, making him land with a squeak. Big Baby gets off the swing and walks over to the source of the sound, but the toys dive under a plastic sand bucket at the last moment, so that Big Baby finds nothing when he reaches the spot where the toys have been standing. Shortly after, he, Lotso, and the other henchmen finally catch on that Andy’s toys are escaping and go after them.

At the garbage chute, after Big Baby, Lotso, and the other Sunnyside toys surround Andy's toys at an open garbage dumpster, Woody brings up the subject of Daisy and shows Lotso and Big Baby an object he has received from Chuckles during his stay at Bonnie's house: Big Baby's old pendant. Upon catching sight of his old pendant, Big Baby suddenly remembers Daisy. As Woody tries to tell the truth about Daisy to Lotso (who doesn't want anything to do with Daisy) and Big Baby, Woody tosses the pendant to Big Baby, who picks it up to take a look at the token of his lost love and shows that he still cares about her, whom he affectionately refers to as "Mama." Lotso suddenly snaps at Big Baby for loving Daisy again, yelling to him that she has never loved him as he snatches the pendant away from Big Baby, slams it onto the dumpster lid, and smashes it into pieces with his cane. Seeing his last remaining memento of his old owner destroyed, Big Baby begins crying, and then Lotso jabs Big Baby abusively with his cane for thinking like a dummy, causing Big Baby to yowl in pain and the other minions to look in shock. Realizing that Lotso has taken him away from Daisy and fed up with all of Lotso's deceit and tyranny, Big Baby lifts up the wicked bear and throws him into the dumpster, then slams the dumpster lid on him. Big Baby then blows a raspberry at Lotso as payback and helps Woody and his friends climb to safety.

During the credits, Big Baby is shown to be having a happier time at a now cool and groovy Sunnyside under the care of Barbie and Ken, the new leaders. In the sandbox, Big Baby is seen making a sandcastle, but when it falls, he wails and Barbie offers him his bottle. At a disco party held in the Butterfly Room, Big Baby, wearing gold diapers (similar to Ken's tuxedo and trousers and Barbie's dress), is seen hugging Ken and Barbie in his arms and happily spinning the couple around in a spotlight.

Big Baby next to Lotso, in his yellow onesie and bonnet

Big Baby sitting on a swing

Big Baby being scolded by Lotso

Big Baby being poked in his stomach by Lotso

Big Baby attempting to throw Lotso into the dumpster 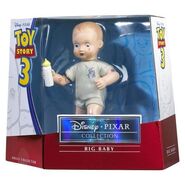 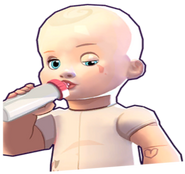