Donald hires the Big Bad Wolf and The Three Little Pigs to perform a show at the club, which Mickey fears since the wolf damaged the club the last time he performed. Under the advice of Ludwig Von Drake, the crew dismantle and hide all the doors so that when the Big Bad Wolf does show up, the doors won't invoke his natural instinct to huff and puff and blow the house down. For the most part, the plan works, as when the Big Bad Wolf does show up, things go smoothly, right up to when he performs his song, aptly-titled "Big Bad Wolf Daddy", but things almost fall apart during the Big Bad Wolf's solos, which cause many a guest to be blown away by the force of his playing, chief among them being Pocahontas with Meeko and the Colors of the Wind, Jiminy Cricket, and even Alice when her dress takes on its parachute form as she's blown away, flying right out the House of Mouse's front doors past a startled Max Goof.

In the end, thanks to the Three Little Pigs when they get back in the cello case the Big Bad Wolf brought them in after revealing he has a "play or filet" contract with them, Donald ends up causing the Big Bad Wolf to blow the House of Mouse down again, leaving Mickey to assign him the duty of cleaning the debris up since it was his fault for hiring the Big Bad Wolf in the first place, much to Donald's own annoyance at this karmic payback. 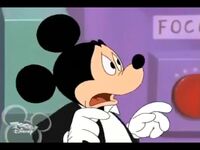 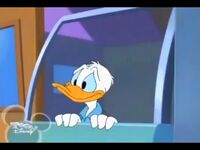 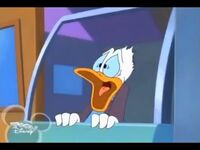 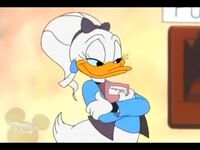 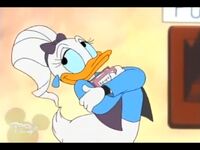 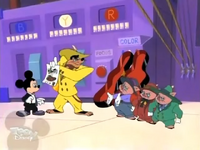 Retrieved from "https://disney.fandom.com/wiki/Big_Bad_Wolf_Daddy?oldid=4450089"
Community content is available under CC-BY-SA unless otherwise noted.