Tod and Copper's friendship, the happiness of others, her friends

Her beak and talons

“Darling, forever is a long long time. And time has a way of changing things.”
―Big Mama, to Tod

Big Mama is a major character in Disney's 1981 feature film, The Fox and the Hound. She is a good friend and mentor of Tod.

Big Mama is an owl who appears to live close to Widow Tweed's home. She appears to be close friends with Dinky and Boomer, as well as forest inhabitants like Vixey.

She is a motherly character who coordinates Tod's adoption by Widow Tweed and later advises and cares for Tod while he is growing up. She possesses a great deal of wisdom and is generally friendly to everybody.

Big Mama is the first to discover a newly orphaned baby fox after having witnessed its mother getting shot and killed by hunters (off-screen) and is quick to comfort the baby. Hearing a pecking noise nearby, she enlists help from a goldfinch named Dinky and a woodpecker named Boomer to find a new caretaker for the baby. While Boomer taps on a front door to a house of Widow Tweed, who answers the door, Big Mama and Boomer lead Tweed to the baby by taking a piece of her laundry that they drop on the fox, whom Tweed subsequently adopts and names Tod.

When Tod grows older, Big Mama notices the irony of his best friend being a hound dog named Copper, who is supposed to be his natural enemy. After Copper is taken away on a long hunting trip, Big Mama lectures Tod about the dangers of his friendship with Copper, warning that it will lead to Tod getting killed. To illustrate her point, Big Mama, along with Dinky and Boomer, show Tod countless animal skins that Copper's owner Amos Slade has hunted down. Big Mama also warns Tod that Copper will be a trained hunting dog when he returns and thus will pose a danger to Tod. Tod initially rejects Big Mama's warning, claiming that Copper would never hunt him.

When winter comes, Big Mama says goodbye to Dinky and Boomer as both birds fly south for the season.

Next spring, as Big Mama throws a pile of leaves out of her home, she sees Tod (who is now grown-up). Dinky and Boomer return home, and Big Mama greets the two birds with a hug, happy to see them again.

After Tod is released into the wild, Big Mama flies to the forest, searching for him. During her search, she finds Vixey, a vixen who lives in the forest. Big Mama tells Vixey about Tod and arranges for the two to meet, for Tod has no idea how to survive in the wild. After finding Tod, Big Mama sets Vixey into the sunlight to make her look as beautiful as possible, then goes over to Tod, whom she leads to the vixen. After Tod and Vixey become enamored with one another, Big Mama watches as Tod attempts to catch a trout to impress her, but ends up humiliating himself, resulting in him insulting Vixey and the two foxes refusing to see or talk to each other. Big Mama intervenes by singing “Appreciate the Lady” to persuade Tod into giving Vixey a second chance, which successfully works as the two foxes fall in love.

Big Mama is last seen sleeping in her tree when she is awakened by Boomer’s pecking. Squeaks the caterpillar, who has transformed into a butterfly, flies over to Big Mama, then waves goodbye to the butterfly as he flies away. But then she is awakened again by Amos Slade’s fuss over his injured leg while being nursed by Widow Tweed. 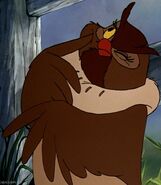 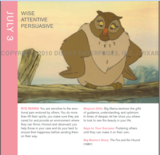