During the Gold Rush in the late 1800's, gold was discovered in Big Thunder Mountain and boomtowns sprung up nearby accordingly such as Rainbow Ridge (Disneyland), Tumbleweed and Dry Gulch (Magic Kingdom) and Thunder Mesa (Disneyland Paris). A Mine Train system was established to transport the ore, but what the settlers didn't count on was that Big Thunder was sacred ground for local Indian tribes. The spirit of Big Thunder was not pleased with the gold being removed from the mountain and the towns and mining company suffered accidents from flooding (Magic Kingdom) and earthquakes (Disneyland, Disneyland Paris). The trains themselves began operating on their own, possessed by mischievous spirits. Though the towns promptly became abandoned, adventurous visitors still arrived to ride the haunted trains.

The revised European ride takes the form of a large island similar to Tom Sawyer Island in the center of the Rivers of the Far West, accessed from its riverside station by tunnels underneath the water. Just like Star Tours, Disneyland Paris is also the only Big Thunder Mountain to open together with the park. 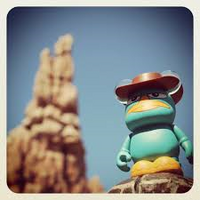 Retrieved from "https://disney.fandom.com/wiki/Big_Thunder_Mountain_Railroad?oldid=1640663"
Community content is available under CC-BY-SA unless otherwise noted.