Erika, Erinn †, Ensa, Evin, and Ennis †
William Henry "Bill" Cosby Jr., is an American stand-up comedian, actor, author, singer, and convicted felon. He is perhaps best known for his stand-up comedy roles and for being the creator of the 1970s animated television series Fat Albert and the Cosby Kids, in which he also voiced the titular character in the show itself. Additionally, he is well-known for starring in his own NBC sitcom called The Bill Cosby Show.

His only Disney roles so far are portraying Barney Satin in The Devil and Max Devlin and Lawrence Woodruff in Jack.

He had a statue outside Disney's Hollywood Studios theme park, but in 2015, following several accusations of rape, Disney took it down.

Bill Cosby with Kermit the Frog. 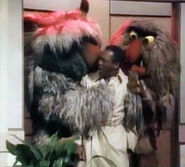 Bill Cosby with Doglion and Sweetums.

Cosby in the late 1980s.
Add a photo to this gallery

Retrieved from "https://disney.fandom.com/wiki/Bill_Cosby?oldid=3761879"
Community content is available under CC-BY-SA unless otherwise noted.