Dad (by Cricket)
Papa (by Tilly)

"Kids, help Dad out! Help Dad out!"
William "Bill" Green is the tritagonist of the Disney Channel animated series Big City Greens. He is the father of Cricket and Tilly Green.

Bill is a strict and caring adult who loves working hard and eating good food. Though he can be a little selfish at times, like in "Photo Op", when he promised the family a trip to the food court but gave them a family photo instead, deep down he puts his family before anything else. He is constantly in a state of worry due to his children's antics and his mother's stubborn behavior and usually has a to find some way to circumvent their plans. Though he hardly shows it, he does have some power of authority over the family and will use it when they push to hard on him.

Bill is a chubby, middle-aged farmer with brown hair and (like the rest of his family) yellow skin. He wears a red trucker hat, a green short-sleeved shirt, blue worn-out jeans, and brown shoes. Half of the index finger on his right hand is missing, thanks to a hay baler.

He bares a resemblance to his ancestor and great-grandfather Jerome and Archibald Green, respectively, as well as his own grandfather.

Bill is a very concerned father when it comes to the antics of his son Cricket. He causes him a lot of stress and is typically impatient during his son's fantastical shenanigans. All he wants is to bond with his son by teaching him the proper ethics of responsibility. Nevertheless, he manages to put up with his rebelliousness by asserting his paternal position in the family. He does become prideful whenever Cricket does something that pleases him, but this would sometimes cause him to place a lot of expectations on him. During the events of "Flimflammed", Bill is shown to not be at all surprised when Cricket is in a terrible situation that he started; uttering to himself "he probably deserved it". Overall, the two do share a loving bond with one another as seen in "Cricket's Place".

Bill deeply cares for his daughter Tilly and seems to put great trust in her, like in "Cricketsitter", when he entrusted her to watch over Cricket while he took Gramma to the hospital. Despite Tilly being older than Cricket, Bill seems to be more concerned about her well-being than his son's, most likely due to her bizarre and eccentric behavior.

Bill loves his mother Alice very dearly, and will do anything to keep her from getting all cranky, like in "Raccooned", when he tried to find her old teddy bear to calm her down from her nightmares. However, he is shown to be irritated by her constant nagging and superstitious ramblings. It is implied that her bombastic personality had an effect on him and made him the cautious man that he is today. Regardless, he wants to spend as much time as he can with her because she might drop dead one day.

Bill and Nancy's relationship is friendly, but rather awkward. The two clearly loved one another long ago to the point that they happily welcomed two children into the world, but following Nancy's arrest, Bill barely showed any concern. When Nancy came back, he happily greeted her, showing that they are still on good terms with one another. Nancy's robust personality clashes with Bill's perfectionist ideals. Despite this as well as their divorce, they still clearly care about one another to the point that they still get together for special occasions, or just for fun. 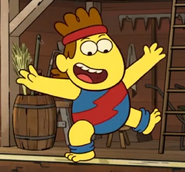 Bill as a child

Bill and Nancy
Add a photo to this gallery

Retrieved from "https://disney.fandom.com/wiki/Bill_Green?oldid=4184251"
Community content is available under CC-BY-SA unless otherwise noted.