Mary Margaret McBride (1950-1971; his death)
William Henry "Bill" Thompson, Jr. was an American radio comedian, actor, and voice actor whose career stretched from the 1930s until his death. He was best known as the original voice of Droopy in most of the MGM theatrical shorts from 1943-1958.

For Disney, he voiced Scrooge McDuck in Scrooge McDuck and Money, the White Rabbit and the Dodo in Alice in Wonderland, Mr. Smee (and other pirates) in Peter Pan, Governor Keith in Ben and Me, Jock, Joe, Bull, Dachsie, and the Irish Policeman in Lady and the Tramp, King Hubert in Sleeping Beauty, Professor Owl and Bertie Birdbrain in Melody and Toot, Whistle, Plunk and Boom, Flannery in Pigs is Pigs, Defense Attorney in The Story of Anyburg, U.S.A., Ranger J. Audubon Woodlore in several "Donald Duck and Humphrey the Bear" entries, J.J. Fate, the Common Man and his Common Sense in How to Catch a Cold, an elderly Spike the Bee in Let's Stick Together, and his last work, Uncle Waldo in The Aristocats.

Thompson was also well-known for being the announcer for several Peter Pan Peanut Butter commercials.

He died 7 days after his 58th birthday.

Governor Keith (Ben and Me)

Jock (Lady and the Tramp)

Defense Attorney from The Story of Anyburg, U.S.A.

Elderly Spike the Bee in "Let's Stick Together" 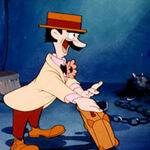 Leslie J. Clark
Add a photo to this gallery

Retrieved from "https://disney.fandom.com/wiki/Bill_Thompson?oldid=4145797"
Community content is available under CC-BY-SA unless otherwise noted.