Tytla is generally considered to be one of the greatest animators ever to work at the studio (Frank Thomas and Ollie Johnston once said that there would never be an animator to replace him), and the first to give animated characters emotions. On Snow White and the Seven Dwarfs he and Fred Moore were put in charge of the animation of the seven dwarfs. Tytla focused particularly on the seven dwarfs; he animated Grumpy's reaction to a kiss from Snow White. He went on to animate three of Disney's most imposing, powerful characters: Stromboli in Pinocchio and Yen Sid and Chernabog in Fantasia, before moving on to the rather more sympathetic titular character of Dumbo.

Like many of his characters, Tytla was a physically imposing man with a personality to match. His best friend at the studio was Art Babbitt. He participated in the Disney animators' strike; he was the only top animator besides Babbit to do so.

After leaving Disney during World War II, he moved to New York to be an animator at the Terrytoons studio, followed by a stint as a director at Famous Studios. His last work before his death would be directing the animation for the 1964 film The Incredible Mr. Limpet. 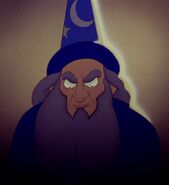 Dumbo
Add a photo to this gallery
Retrieved from "https://disney.fandom.com/wiki/Bill_Tytla?oldid=3558146"
Community content is available under CC-BY-SA unless otherwise noted.