Barbara Bletcher
William "Billy" Bletcher was an American actor and voice actor. Best known for his work in various black and white films and silent films.

His notable Disney roles included the original voices of Pete and Big Bad Wolf, Horace Horsecollar in Mickey's Mellerdrammer, Friday in Mickey's Man Friday, King Midas in The Golden Touch, Dirty Bill in The Robber Kitten, Judge Owl in Who Killed Cock Robin?, the Cat Prosecutor in Pluto's Judgement Day, Captain Katt in Three Blind Mouseketeers, the Robot Butler in Modern Inventions, the bass singer and villain on radio in Donald's Ostrich, the short member of the Lonesome Ghosts in Lonesome Ghosts, the Bull in Farmyard Symphony, the Security Guard in The Autograph Hound, a clown in Dumbo, the dogcatcher in Canine Casanova, Detective Hennessey in Duck Pimples, Donald's boss in Old Sequoia, the Farmer and the Painter in In Dutch, the Narrator in A Knight for a Day and Winter Storage, the motel proprietor in Wide Open Spaces, The Headless Horseman in The Adventures of Ichabod and Mr. Toad, and the music store proprietor in Pluto's Blue Note. He was considered to voice Stromboli in Pinocchio. 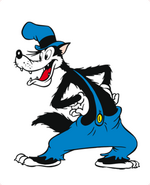 Headless Horseman
(The Adventures of Ichabod and Mr. Toad)

Bletcher behind the scenes of Mr. Mouse Takes a Trip.

Add a photo to this gallery
Retrieved from "https://disney.fandom.com/wiki/Billy_Bletcher?oldid=3828862"
Community content is available under CC-BY-SA unless otherwise noted.