1981-present
William Oliver "Billy" Campbell is an American film and TV actor. He is known for starring in several films, such as Bram Stoker's Dracula, The Brylcreem Boys, and Ghost Town.

For Disney, he played Cliff Secord in the 1991 Disney film, The Rocketeer, and voices Dave Secord in the 2019 animated sequel series of the same name. He also played Rick Sammler on the ABC show, Once and Again. 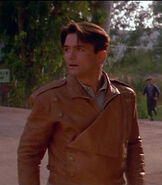 Dave Secord
(The Rocketeer, 2019 TV Series)
Add a photo to this gallery

Billy Campbell speaks at the Killing Lincoln panel at the 2013 Winter TCA Tour.

Billy Campbell attending the 58th annual Monte Carlo TV Fest in June 2018.
Add a photo to this gallery
Retrieved from "https://disney.fandom.com/wiki/Billy_Campbell?oldid=4132459"
Community content is available under CC-BY-SA unless otherwise noted.