2007-present
William Gregory "Billy" Magnussen is an American actor and musician. He is known for his role as Casey Hughes on the CBS soap opera As the World Turns.

For Disney, he played Rapunzel's Prince in the 2014 film, Into the Woods and Prince Anders in the 2019 live-action adaptation of Aladdin.

He is also in Talks to reprise the role in a spinoff series for Disney+.

Rapunzel's Prince
(Into the Woods) 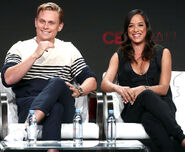