Ava and Gia
William George "Billy" Zane Jr. is an American actor, voice actor, and producer. He is probably most famous for playing psychotic Hughie Warriner in Dead Calm and Caledon Hockley in Titanic.

For Disney, he voiced John Rolfe in the 1998 Disney direct-to-DVD Pocahontas II: Journey to a New World. He was also the original voice for Ansem, Seeker of Darkness, in the video game Kingdom Hearts. He also played Mr. Fabian in Tombstone. 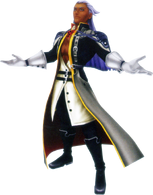 Billy Zane at premiere of Gangster Squad in January 2013.

Billy Zane speaks at the Mad Dogs panel at the 2016 Winter TCA Tour.

Billy Zane attending the 2016 ABC Freeform Upfront.
Add a photo to this gallery
Retrieved from "https://disney.fandom.com/wiki/Billy_Zane?oldid=3804485"
Community content is available under CC-BY-SA unless otherwise noted.