A Bit is a binary digit from Tron that is represented by a white polyhedral shape, which is a compound of dodecahedron and icosahedron.

It was only capable of providing yes or no answers to any question. Despite this, it still managed to convey emotion and other levels of complexity.

Bit was originally to have a more extensive role in the film, but it was cut to just two minutes due to scheduling reasons. Despite this, the co-creators of Max Headroom, in their book Creative Computer Graphics, called it "one of the most memorable characters in the film." At the time of the film's release, the character represented an innovative use of computer graphics techniques such as vector graphics and morphing.

Kevin Flynn had gold and silver decorations that resembled Bit in his home.

Able has a Bit in his office, which agrees that Zed is an idiot. 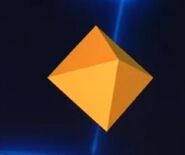 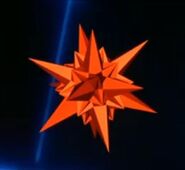 CLU and his Bit

Bit as a badge in Disney Heroes: Battle Mode