Her schemes being foiled, being treated like a victim

Felicia is an attractive young woman with white hair. Her costume has seen many designs through her history, but has always kept some trademark details, like the total black color, white fur and a domino mask around her eyes.

Spider-Man first encounters Black Cat having infiltrated Horizon High to steal the V-252 for an unknown client. Spider-Man had a hard time stopping Black Cat's heists due to her bad luck abilities. Eventually, Spider-Man managed to turn the tables on Black Cat's abilities where he ends up immobilizing her with his webs and handing her over to the police.

Black Cat as she appears in Disney Infinity 2.0.

Black Cat as she appears in Marvel: Avengers Alliance. 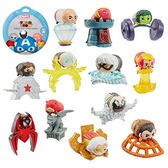