The Queen Anne's Revenge (since it was originally Blackbeard's ship)

Blackbeard (briefly), Emily Stowecroft, and Daughters of the Buccaneers

Blackbeard (briefly), Emily Stowecroft, and Daughters of the Buccaneers

Blackbeard (briefly), his crew (formerly), Emily Stowecroft, and Daughters of the Buccaneers

Still standing.
Blackbeard's Inn is (or was) the Inn and home of Blackbeard and his crew. It had been passed down to the descendants of Blackbeard's crew known as the Daughters of the Buccaneers and their head, Emily Stowecroft. The owners were going to lose the Inn to the villainous gambler, Silky Seymour and his men until Steve Walker and Jo Anne Baker, with Blackbeard's Ghost of course, were able to save it just in time before its deadline at midnight; allowing also Blackbeard himself to burn the will, thus perform a good deed, release himself from the curse, and join his ghostly crew.

The building is located on a small island somewhat connected to the mainland of Godolphin, North Carolina. The building itself is surrounded by some trees and cars parked in a parking lot. A small area, known as the Blackbeard's Room, inside his Inn is outfitted for Blackbeard to rest and sleep. It used to be outfitted for Blackbeard to watch for passing ships on a spyglass, choose which one to attack, and then, discuss the plan of attack with his crew. When Steve Walker accidentally sits on a bed warmer which belonged to Blackbeard's 10th wife: Aldetha the witch, breaks it in half, finds her book of spells and a spell that brings his eyes and ears to one who is bound in limbo, and says the magic words of the spell: "Kree, Kruh, Vergo, Gaba, Kalto, Kree", Walker could now see "That's right" Blackbeard's ghost in his own room.

The building was originally Blackbeard's ship called The Queen Anne's Revenge, which is why it is shaped like a ship. The building itself is mostly brown in color, with multiple windows, chimneys, and 3 torch lamps of varying sizes and a big sign written: BLACKBEARD'S INN. Inside, there are various rooms, now used by Emily and the Daughters of the Buccaneers, that were used by Blackbeard and his crew. Inside hangs a portrait of the jolly scallywag pirate himself. 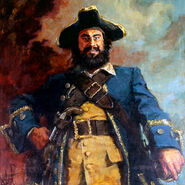 Daughters of the Buccaneers playing music beside Blackbeard's portrait

Blackbeard's bed in his room
Add a photo to this gallery

Retrieved from "https://disney.fandom.com/wiki/Blackbeard%27s_Inn?oldid=2924073"
Community content is available under CC-BY-SA unless otherwise noted.