Ultimate Spider-Man
Hulk and the Agents of S.M.A.S.H.
Marvel Disk Wars: The Avengers

Active
Blade is a character from Marvel Comics. He first appeared in the animated series, Ultimate Spider-Man episode, "Blade and the Howling Commandos". He made his debut, in the Marvel Cinematic Universe during the post-credits scene of Eternals, in which he appeared during a voice-over, and will return as the eponymous protagonist of Blade.[1]

Blade was created by Marv Wolfman and Gene Colan.

Blade is a strong and tall man dressed in black clothing. Due to being a dhampir, half-human and half-vampire, he possesses fangs that are often concealed.

Due to Blade's nature as a dhampir, his eyes are hurt by sunlight, which is why he always wears sunglasses.

Blade has all of vampiric powers and none of the weakness (beyond his eyes being hurt by sunlight, and a thirst for blood). He has superhuman strength, speed, stamina, senses, rapid regeneration, nigh-immortality & immunity to sunlight, wooden stakes, silver, garlic, and holy water. He counters his thirst for blood by consuming animal blood, blood from blood banks, and a serum that is similar enough to blood for him to consume. 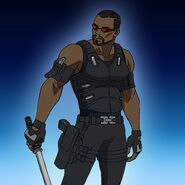