1991-present
Blake McIver Ewing is an American singer-songwriter, actor, model, and pianist. He is known for portraying Derek S. Boyd in the ABC sitcom Full House and Waldo Johnston III in Universal Pictures' 1994 comedy film, The Little Rascals. He also voiced Eugene Horowitz in Nickelodeon's Hey Arnold! and Hey Arnold!: The Movie. In 2020, he reprised his role as Derek Boyd in the series finale of the Netflix sitcom Fuller House, the sequel series to Full House.

For Disney, he voiced Menlo in Recess and provided additional voices in Recess: Taking the Fifth Grade. He also played a taverner in the 1995 Disney film, Tom and Huck and a choir boy in the 2004 Touchstone Pictures film, Raising Helen, and voiced a piglet in the 1995 Miramax film, Gordy, Little Ape in Tarzan, Mendel in Lloyd in Space, and a merboy in The Little Mermaid II: Return to the Sea. In addition, he made guest appearances in ABC's Home Improvement, Clueless, and The Drew Carrey Show. 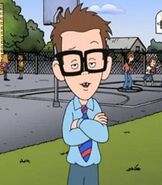 Merboy
(The Little Mermaid II: Return to the Sea)
Community content is available under CC-BY-SA unless otherwise noted.
Advertisement