“Are you a tough guy?”
―Tinker Bell

Blaze is a character from the Disney Fairies franchise, making his debut in the 2009 film, Tinker Bell and the Lost Treasure.

While trying to evade a hungry bat, Blaze crash lands into Tinker Bell's balloon, though the pixie fails to notice. After flying further, Tinker Bell begins to get hungry but when she looks through her food pouches, she finds that they've all been eaten by a firefly. Tink orders the firefly to leave, which he seemingly does, though he truly wanted to tag along with Tink on her quest to find a magical mirror that can grant one wish. Tink hopes to use the wish to repair the shattered moonstone that will provide blue pixie dust for the fairies. After Blaze's apparent exit, Tink tries to read her map but it's too dark to see. Blaze then sheds light on the map to help Tink, and the tinker finally allows him to stay.

As the duo's adventure continues, Tink thinks she has stumbled upon the stone arch that is said to lead way to the mirror. She leaves the balloon to make sure of this and leaves Blaze to watch over things. While Tink was out, however, the balloon began to stray away, and Blaze rushes to tell Tink. Tink was too busy trying to figure out why she stumbled upon a bent tree instead of the stone ark, to notice Blaze. When she finally sees the balloon floating off, she briefly blames Blaze. The two follow after it but the harsh winds knock them down. The next morning, Tinker Bell awakens and is hungry and lost.

Blaze scouts out to rally some forest insects that provided food and water for Tink. They also lead her and Blaze to the stone arch, and the adventure continues. They find the shipwreck that is said to house the mirror and head inside. Tink finds the mirror but accidentally wishes for Blaze to silence for a minute. With the one wish wasted, Tinker Bell breaks down in tears and wishes her friend Terence was there to help her out. Luckily, Terence followed Tink after finding her blueprints to build a balloon. Terence quickly befriends Blaze as well, but the heartfelt reunion is cut short when the team is attacked by rats.

Blaze briefly distracts them with his light, long enough for Tink and Terence to get further away. When all seems lost, however, Tinker Bell uses Blaze's light to create a menacing shadow puppet, scaring away the rodents. Tink and Blaze are led back to the balloon, which Terence found while searching for Tink. They make way for Pixie Hollow and along the way, Tinker Bell fixes the scepter using a white gem from the top of the mirror, the scepter pieces Terence has wisely brought, and the moonstone pieces, all set at just the right angle.

Tinker Bell, Blaze, and Terence are all praised as heroes upon their return to Pixie Hollow and peace is restored one again.

Blaze joins many of Pixie Hollow's residents at Fairy Camp for the summer. He can be seen at the beginning of the film, in the middle when Vidia and the others build a boat to search and rescue Tinker Bell after she's been captured by humans and at the end.

Blaze makes a cameo appearance in the television special.

Blaze in Tinker Bell and the Great Fairy Rescue 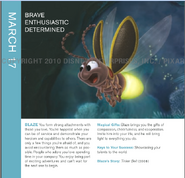 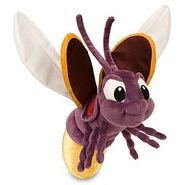 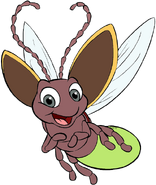