"Bleeped" is the first segment of the fifty-sixth episode of Big City Greens.

Cricket is amused by a new socially unacceptable word in his big city world and tempts fate by repeating it against Bill's wishes.

All the kids of Big City are gathered at the community center by Community Sue for an informal choir production that she put together. Sue takes great pleasure in hearing Tilly due to her ability to hit a high note. This results in Tilly wanting to try and reach the highest note that only animals can hear, which she trains herself to do throughout the episode. As they take a break, Gramma Alice is setting up chairs for the night's performance. After injuring herself, she utters "Blort!" which Cricket finds amusing. Tilly informs him that she just said a cuss word and that they should simply forget about it. However, Cricket, being the troublemaker that he is, cannot resist repeating the word and instead wants to take advantage of it by telling everyone about it.

Cricket tells Remy the word and he soon becomes amused by it. Soon, all the children begin to repeat it, angering Sue who calls Cricket into her office. Bill is brought in and learns what Cricket has done and forbids him to repeat it, but he refuses as he finds it too much fun. Bill gathers all the children and tries to get them to stop, but they disobey him. Afterwards, he recruits Officer Keys to help who comes up with the idea to "speak their language" which consists of speaking dated slang. However, Keys ends up telling them more cuss words which makes the problem worse. Bill finally becomes fed up and threatens the children from ever repeating any of the cuss words ever again, which actually seems to work.

As the show begins, Nancy compliments Bill for setting the kids straight, but Bill deduces that Cricket plans to say the word anyway. As the children begin to sing, Bill chases Cricket through the gymnasium before finally catching him. Cricket tells him that he can never control what he says when he is out of sight and will cuss no matter what, and Bill agrees. Telling him that he has to decide what kind of person he wants to be and allows him to say whatever he wants. Cricket runs up and prepares to cuss, but realizes he cannot do it upon seeing Bill in the audience, and simply sings the final lyric. Tilly sings her high note which causes the zoo animals across town to escape and hear Tilly. Cricket tells Bill that he decided that he did not want to be a jerk and ruin everyone's fun. A frustrated Alice tells everyone, "Let's get the blort out of here!" 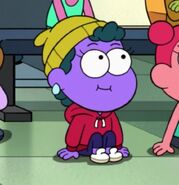