The Blockade Runner (officially known as CR90 Corellian Corvette) is a small multi-purpose corvette used by the Rebel Alliance, used in anti-starfighter roles. The ship can boost its engine power to get away from any fight it can't win, especially against bigger frigates and capitol ships. One ship, the Tantive IV, was owned by Bail Organa and his adoptive daughter, Leia Organa. Its weaponry complement consists of two turrets and four turbolasers mounted on each dorsal escape pods. 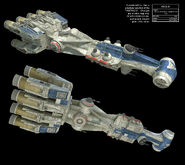 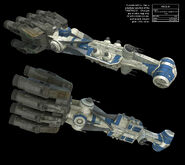 Retrieved from "https://disney.fandom.com/wiki/Blockade_Runner?oldid=2363033"
Community content is available under CC-BY-SA unless otherwise noted.