Slime-like creatures made of paint and thinner

Soldiers of the The Blot (formerly)

The Blotlings are the essential backbone of the Blot army. Like the Blot, they are creations of paint and thinner and are vulnerable to the two substance.

Blotlings come in different varieties, and there are also different varieties within those. Although all of the Blotlings serve the Blot, some are direct spawn of him, while others are former inhabitants of the Wasteland turned into blotlings. They can be found everywhere in the Wasteland, except in Mean Street, probably because this sector is under the protection of Oswald. They're very aggressive creatures, the fact is that they attack anything that is not a blotling. Although the Blotlings are mostly a mindless collective, some Blotlings like the Sweepers and Shadow Blot are more intelligent than others.

The Blotlings are one of the main types of enemies encountered in the game. Mickey Mouse has the choice of either destroying a Blotling with thinner or turning it ally with the player using paint. Mickey can also use Bunny Children to devour the blotlings for him. After the Blot is freed from its prison, it spawns more Blotlings to attack, including a special type called Bloticles to suck the paint from all over Wasteland. Once the Blot is destroyed, the Blotling threat ceases.

In Epic Mickey 2: The Power of Two, the new Blotling, the Dropwing, replaces the Seer from the first game. Also, one-eyed Spatters appear in the game, controlling Blotworx from the inside. However, neither the Blot nor the Bloticles reappear. Despite Wasteland being restored in the first game, it appears that evil Blotlings remain. Apparently the Paint rain didn't turn them all good or they somehow got turned back to their evil way of living, as some of the originals are found across the Wasteland and at Disney Gulch. Apart from that there is no difference on how to fight them, you can even use Oswald's electricity to stun them for a while.

A Pirate Spatter in Ventureland

A Spatter from Lonesome Manor

Concept of Mickey fighting a Slobber

Concept art for the Spladoosh
Add a photo to this gallery

A Spatter in Epic Mickey: Power of Illusion

Mickey and a Sweeper near an anchor near Skull Island

The first Slobber that you encounter 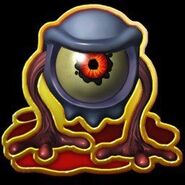 Seer pin from Epic Mickey 2: The Power of Two. 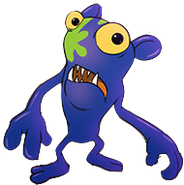 Retrieved from "https://disney.fandom.com/wiki/Blotlings?oldid=3712912"
Community content is available under CC-BY-SA unless otherwise noted.