Cartoon Wasteland
Blotworx are curious hybrids of Blotlings and Beetleworx who appear in Epic Mickey 2: The Power of Two. They were created by the Mad Doctor initially to serve as a new army to get revenge, but they were deemed unpredictable and he spread them throughout Wasteland. They are piloted by Spatters forced to do so. They come in three types: Blockers, Rockers and Shockers, though the biggest the Mad Doctor ever did build was the Blotworx Dragon.

When Oswald zaps one with electricity, a blotling will come out of the cockpit and look around. While he is looking around, Mickey can spray paint or thinner as he would do with a regular Blotling. If you decide to paint the blotling inside, the Blotworx will become friendly and help you. If you use thinner, the Blotworx will break down and explode.

Blockers are the most common type of Blotworx encountered in Wasteland. Their name comes from the red force field they activate from their left arm to protect themselves from Mickey's attacks. Their appearance is that of the red robot V.I.N.CENT from The Black Hole, a pincer-like left arm and a wrecking ball on the right arm. They attack by swinging the iron ball attached to their right arm.

Rockers are a semi-common variety of Blotworx, often noted as the most formidable. Their namesake is their constant rocking motion as they move. Being vehicles, they can run down Mickey or Oswald and knock them aside, but their most powerful weapons are rocket-shaped homing missiles that seek you out. Their appearance suggests they are a cross between a car and a unicycle, though concept art shows they were originally modeled after Herbie from The Love Bug.

Shockers are the strongest type of Blotworx, but the least common in the game. These huge Blotworx attack by slamming the ground with their fists and emitting bursts of electricity, the latter method being their namesake. Their appearance, particularly the big mask, comes from the film Atlantis: The Lost Empire.

Art for the Shocker Blotworx 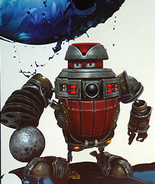 A Shocker in the Train Tunnels.

The Version of the Rockers which was Modeled after Herbie