Snacks
"With These Blueprints" is a song from the episode, "Phineas and Ferb Interrupted". It was sung by Baljeet, Buford, Candace, and Isabella to help snap Phineas and Ferb out of their hypnotic dullness. At the same time, Heinz Doofenshmirtz performs a portion of the song as he works with Perry to rebuild his "Dull and Boring-Inator" into a "Dynamic-Inator".

Baljeet: With these blueprints we can make a mighty tower, 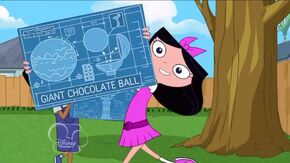 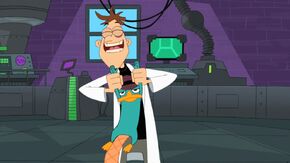 Doofenshmirtz: They make the things we dream reality!
Baljeet, Buford, Candace, Isabella: We can build jet powered water wings,
a catapult with mattress springs,
and practically anything you see!
Candace, Isabella, Baljeet, Doofenshmirtz, Buford: We've got one prints, two prints,
nothing we can't do prints!
Three prints, four prints,
everyday it's more prints!
Five prints, six prints,
nothing we can't fix prints!
Big prints, small prints,
make anything at all prints!
There's nothing we can't do,
as long as they're blue!
So get some hammers and nails,
and buckets and pails!
So grab a two-by-four,
'Cause we've got blueprints galore!
We've got a lot of work to do!
Baljeet: With these prints that are blue!

Retrieved from "https://disney.fandom.com/wiki/Blueprints?oldid=3558172"
Community content is available under CC-BY-SA unless otherwise noted.