Gwyneth Paltrow
Jake Paltrow
Blythe Katherine Danner is an American film, television, and stage actress. She is known for her numerous roles in film, such as Denni Byrnes in the Meet the Parents trilogy.

She is also the mother of Gwyneth Paltrow.

For Disney, she voiced Madam Suliman in the English dub version of Howl's Moving Castle, Gramma May in Goldie & Bear, and played Ruth Madoff in the ABC TV miniseries Madoff and Mrs. Murphy in Murder She Purred: A Mrs. Murphy Mystery. 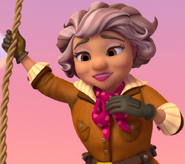 Gramma May
(Goldie & Bear)
Add a photo to this gallery

Blythe Danner attending the 2019 Sundance Film Fest.
Add a photo to this gallery
Retrieved from "https://disney.fandom.com/wiki/Blythe_Danner?oldid=3928024"
Community content is available under CC-BY-SA unless otherwise noted.