Leader of the Nite Owls
Leader of Mandalorian resistance

Her sister, her fellow Nite Owls, Jedi, her homeworld, protecting her people

“Our enemies wanna separate us. But Mandalorians are stronger together.”
―Bo-Katan Kryze

Bo-Katan Kryze is a female Mandalorian, who appears in Star Wars: The Clone Wars, Star Wars Rebels, and The Mandalorian. Introduced in the fourth season of The Clone Wars as a supporting antagonist, her role in the series gradually shifted to more of a hero during the fifth season, culminating with her serving as the tritagonist of the seventh and final season. She later returns in the premiere of the final season of Star Wars Rebels and made her live-action debut in the second season of The Mandalorian.

She is voiced in both Star Wars: The Clone Wars and Star Wars Rebels by Katee Sackhoff, who also physically portrays her in The Mandalorian.

Bo-Katan, or simply Bo, is the sister of Satine Kryze, who once ruled as the Duchess of Mandalore, and served the Mandalorian terrorist group Death Watch during the Clone Wars until the Sith Lord Maul killed her leader Pre Vizsla. This led her to stage a rebellion against Maul's rule, attracting the attention of the Republic. While Mandalore was neutral in the Clone Wars, Bo-Katan asked the Republic to send forces to Mandalore to help capture Maul. As Anakin and Obi-Wan had been sent to rescue Palpatine from Dooku and Grievous' flagship above Coruscant, Ahsoka and Rex were sent instead, greatly angering Maul, who was anticipating Kenobi to come. Ahsoka, Rex, and Bo were able to capture Maul after a lightsaber fight, but did not heed his warnings about the impending disaster: Order 66, which Maul was familiar with despite no longer being associated with Palpatine.

During the Galactic Civil War, Bo Katan would later aid Sabine Wren and the crew of the Ghost in destroying a superweapon that could destroy Beskar armor. When the weapon was destroyed, Sabine would give her the Darksaber to showcase that she was the rightful leader of Mandalore.

Five years after the Battle of Endor, Bo-Katan would later encounter Din Djarin on Trask as part of a Mandalorian, where he had been attacked by Quarren pirates who tried to kill him and the Child to steal his armor. Bo-Katan and her squad rescued Din Djarin and the Child, asking him to aid them in stealing Imperial weapons and supplies in exchange for aid in finding the Jedi to return the Child to them. Din Djarin was at first disturbed by Bo-Katan's removal of her helmet, believing she was not Mandalorian. However, this turned out to be the norm for most Mandalorians, as he was shocked to learn that he was part of a sect of Mandalorians that broke away from the mainstream Mandalorian society in favor of the old ways. Djarin agreed, proceeding to help them take the transport vessel. Suffering close calls and no casualties, the four Mandalorians commandeered the ship, while Bo-Katan tried to interrogate the captain as to whether Moff Gideon had the Darksaber. The captain refused to give her a straight answer, killing himself with an electric implant in his teeth rather than facing Moff Gideon's wrath. Afterwards, Bo-Katan tried to convince Djarin to join her, but the latter told her he had to remain obligated to his quest. Understanding, Bo-Katan told him to seek out Ahsoka Tano in the city of Calodan on the forest world of Corvus before they parted ways.

Some time later, Bo-Katan and her Nite Owl camrade Koska Reeves are having a snack at a bar when they are approached by Djarin accompanied by former bounty hunter Boba Fett. Djarin enlisted the help of Bo-Katan to save Grogu (The Child) from the clutches of Moff Gideon. Bo-Katan refuses at first and even calls Boba a fake Mandalorian, which he does not deny because he has never considered himself as such. She changes her mind, however, when Djarin reveals to have the coordinates of Gideon's cruiser and was willing to leave the cruiser to her to reclaim Mandalore. When Boba mocked Mandalore's interest, Bo-Katan called him a disgrace for his armor and daring to refer to Jango Fett as Boba's donor instead of his father as she knew by his voice that he was just a clone like the Clone Troopers. A fight ensued between Boba and Koska that Bo-Katan quickly stopped before accepting Djarin's offer, especially wanting to recover the Darksaber.

After infiltrating the Imperial cruiser using subterfuge, Bo-Katan, Cara Dune, Koska and Fennec Shand fight their way to the bridge taking out every Stormtroopers and Imperial officer in their path as Djarin goes. look for Grogu. Once the bridge is under their control, Bo-Katan cannot find Gideon and a bit later, Djarin joins the four women with Grogu and a handcuffed Gideon, much to Bo-Katan's shock as she can no longer claim the Darksaber only Gideon had taken from him during the purge. Gideon then tries to get Bo-Katan to kill Djarin to take back the sword to no avail and Djarin voluntarily wants to return the weapon to the leader of the Nite Owl but she resigns herself. The next moment, Gideon's Dark Trooper droids begin punching through the armored door separating them from the group whose chances of beating the blaster-proof droids. Luke Skywalker suddenly arrives aboard the ship, easily destroying the Dark Troopers and prompting Gideon to shoot Bo-Katan only to attempt to take Grogu down before being overpowered by the rest of the group. Surviving thanks to her beskar armor, Bo-Katan then watches as Grogu walks away with Skywalker and R2-D2.

Bo-Katan as she appeared in Star Wars: The Clone Wars 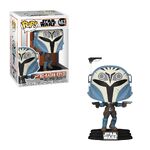 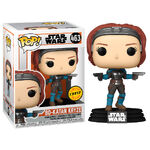