Winning, power, bragging about his accomplishments

“So, after I vanquished Captain America and Iron Man, I claimed my prize, all six Infinity Stones.”
―Boastful Loki[src]

Boastful Loki is a character from the Marvel Cinematic Universe that appears in the Disney+ series Loki. He is a Variant of Loki that was captured by the Time Variance Authority and sent to the Void.

Boastful Loki is a Loki from an alternate reality. He claims to have killed Captain America and Iron Man, and then obtained all six Infinity Stones. This created a nexus event which caused the Sacred Timeline to branch, so he was captured by the Time Variance Authority and his reality was destroyed. He was then judged for his crimes against the Sacred Timeline and pruned, being sent to the Void. The other Lokis in the Void, however, claim that this Loki is lying about his backstory.

Boastful Loki first appears during the middle credits scene of the fourth episode. He along with Kid Loki, Alligator Loki and Classic Loki find the Variant of Loki that was recently pruned by the TVA, ending up in the Void. They invite him to join them in order to survive.

In the fifth episode, while the Loki Variants are walking in a hurry, Boastful Loki and the other Variants are questioned by Loki, who becomes exasperated wanting to know what is going on. They explain to him that everything that was pruned by the TVA ends up there. Boastful Loki tells Loki about Alioth, a living tempest that consumes energy and matter and can devour the branched realities in an instant, making sure that nothing returns. When Loki asks if there is a way to escape the Void and if they have tried to use a TemPad, the other Lokis laugh and Boastful Loki makes a joke, explaning that Loki would not find any TemPads around. Loki then suggests them to try to create a nexus event, but Boastful Loki says that the TVA does not care about what happens in the Void. As they finish their explanation, Kid Loki, who is the King of the Void, announces that they should keep moving, as they are trying to avoid Alioth and survive.

After some time walking, they arrive at their hideout, the Loki Palace. As they enter, Classic Loki, an elder Loki, asks why Loki seems to want to return so badly to the TVA. Boastful Loki playfully asks if Loki had left his "glorious purpose" at the TVA, and Loki replies that he kind of did. Later, Boastful Loki sits with the other Lokis as they share their stories. Boastful Loki tells them that he killed both Iron Man and Captain America, then claimed all six Infinity Stones. Upon hearing this, Alligator Loki growls and Classic Loki explains that the alligator is saying that Boastful Loki is lying. Boastful Loki tells the alligator that at least he did not cause a nexus event just because he ate the neighbor's cat. This infuriates Alligator Loki, so he jumps on him, trying to bite him. Loki and Classic Loki grab the alligator and throw him back into his pool. Eventually, Loki decides to leave to try to go back to the TVA to find Sylvie, a female Variant Loki, and asks for their help to kill Alioth, but Boastful Loki and the other Lokis laugh, because they do not think it is possible for him to do that. Frustrated, Loki attempts to leave the bunker by himself but then meets President Loki, a Variant that brought several other Loki Variants to the hideout.

“Apologies, my liege. I betrayed you, and now, I'm king.”
―Boastful Loki[src] 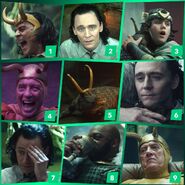 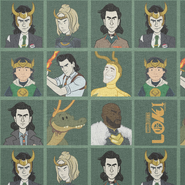 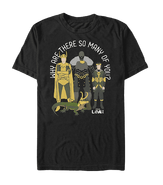