Bob Cratchit from the original novel

Christmas, his family (mainly his son)

Cratchit retains a loyalty to his boss despite the protestations of his wife. His youngest son, Tiny Tim, is a cripple, and it is partly through concern for his plight that Scrooge makes the transformation from miser to philanthropist.

Bob Cratchit spends a normal day at work shivering, due to Scrooge rationing coal. Bob gets to the point of begging Scrooge to take Christmas Day off, so he can spend time with his family.

When The Ghost of Christmas Present is showing Scrooge the joy of Christmas, he shows how Bob Cratchit's family, despite being poor, are still grateful about the Christmas spirit.

When The Ghost of Christmas Yet To Come shows Scrooge his future, it is shown that Bob Cratchit's youngest son, Tiny Tim, died due to the lack food and medical help he needed thanks to Scrooge underpaying Bob Cratchit.

In 2012, Kermit the Frog mistakenly confused Bob Cratchit with Captain Abraham Smollett, to be the character he played on The Muppet Christmas Carol several times during his promotional tour for Die Muppets in Germany.

In the movie, he turns out to be Charles Dickens. 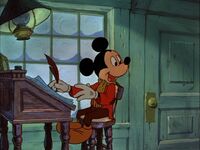 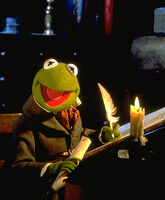 Kermit as Bob Cratchit in The Muppet Christmas Carol.
Add a photo to this gallery

Retrieved from "https://disney.fandom.com/wiki/Bob_Cratchit?oldid=4360077"
Community content is available under CC-BY-SA unless otherwise noted.