Director of Special Vehicle Development
Robert "Bob" Gurr is an American Imagineer and Disney Legend responsible for designing most, if not all, of the ride vehicles for many early Disneyland attractions.[1] Disney insiders often refer to these as "Gurrmobiles".

Named a Disney Legend in 2004,[2] Gurr continues to consult on Disney projects. In a March 2008 presentation Gurr was honored with a Window on Main Street, U.S.A. The window, seen above the Disney Clothiers on Main Street, reads: Leading the race to the future – Meteor Cycle Co. – Our vehicles pass the test of time – Fast, Faultless, and Fadless – Bob Gurr – Design Impresario 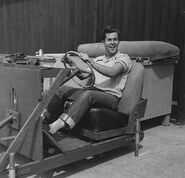