Robert Walter "Bob" Joles is an American actor, voice actor, and musician who has worked on several Disney products. He is best known for replacing Sebastian Cabot as Bagheera and the Narrator for the Winnie-the-Pooh sequels. He is also the voice of Sneezy, Gremlin Gus, two characters in The Wild, Sallah in Disneyland's Indiana Jones Adventure attraction, and is the current narrator of the Disneyland Railroad, replacing Earl Hindman.

Other roles include portraying the voice of Mr. Tipton in the The Suite Life of Zack and Cody. 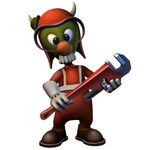 Bill Green
(Big City Greens)
Add a photo to this gallery
Retrieved from "https://disney.fandom.com/wiki/Bob_Joles?oldid=3866534"
Community content is available under CC-BY-SA unless otherwise noted.