Jake (with Lumet)
Rocco and Rafa (with Byrne)
Robert Michael "Bobby" Cannavale (pronounced can-a-val-ee) is an American actor and voice actor known for is distinctive husky voice. He is best known for his leading role as Bobby Caffey in the first two seasons of the NBC crime drama series Third Watch. He also voiced Valiente and his father in Ferdinand and Frankie in The Nut Job 2: Nutty by Nature.

For Disney, he portrayed James "Jim" Paxton in Ant-Man and Ant-Man and the Wasp. He also played Chic in the 2004 Miramax film, Shall We Dance?. 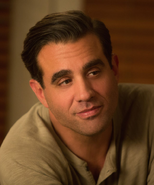 Bobby Canavale at the premiere of Ant-Man in June 2015.

Bobby Cannavale speaks at the Homecoming panel at the Amazon portion of the 2018 Summer TCA Press Tour.
Add a photo to this gallery
Retrieved from "https://disney.fandom.com/wiki/Bobby_Cannavale?oldid=4037931"
Community content is available under CC-BY-SA unless otherwise noted.