3
Robert Cletus "Bobby" Driscoll was an American child actor, voice actor, and artist, who appeared in starring roles in several Disney films. He starred in the live-action films Song of the South as Johnny, So Dear to My Heart as Jeremiah Kincaid, Treasure Island as Jim Hawkins, and Melody Time as himself. He also voiced Goofy Jr., Goofy's son in two animated shorts, Fathers Are People and Father's Lion. Perhaps, Bobby Driscoll's most famous role was his last role for Disney, as the voice and close-up model for Peter Pan in the 1953 Disney animated feature film of the same name. He was originally cast as the main title role in Johnny Tremain. Bobby Driscoll died 27 days after his 31st birthday.

Bobby Driscoll's body was found on March 30, 1968 in an abandoned building, his body was unclaimed and buried in Potter's Field on Hart Island, New York City. In 1969, his mother with the help of the Disney Studio tracked down his body and it was confirmed with a fingerprint match provided by NYPD. The public did not know of his death until it was revealed in 1972, when Song of the South was re-released in theaters.

Johnny
(Song of the South)

Jeremiah Kincaid
(So Dear to My Heart)

Himself
(Melody Time; One Hour in Wonderland) 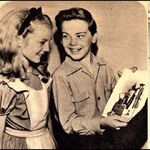 Photo of a young Driscoll

Bobby with "Alice" in One Hour in Wonderland

Driscoll with Leedy and Baskett
Community content is available under CC-BY-SA unless otherwise noted.
Advertisement