Tasha and Taylor (both with Luly)
Robert Francis "Bobcat" Goldthwait is an American comedian, filmmaker, actor, and voice artist. He is well-known for voicing Pop Fizz in the Skylanders video game franchise since Skylanders: Giants in 2012. He also reprised this role in the spin-off television series Skylanders Academy.

For Disney, he is best known for providing the voice of Pain in Disney's 1997 animated feature film, Hercules, a role he later reprised in the television series, House of Mouse, Sorcerers of the Magic Kingdom, and World of Color: Villainous. He would portray the Adrenal Gland in Cranium Command at Epcot. He also voiced Nosy in Lilo & Stitch: The Series and its 2006 film, Leroy & Stitch. Additionally, he voiced XL in Buzz Lightyear of Star Command, Fish Santa in Fish Hooks, Dickie in Randy Cunningham: 9th Grade Ninja, Dr. Wolfman in Future-Worm!, and Mr. Floppy in the Touchstone Television sitcom Unhappily Ever After. He also portrayed Yogi Paxil in Encino Woman.

In 1998, Goldthwait directed the unaired pilot of The Aquabats!, produced for Buena Vista Television and based on the real-life band of the same name. Buena Vista ultimately did not produce a full series, and the show would eventually be produced 14 years later as The Aquabats! Super Show! for Hub Network.

Bobcat Goldthwait and Matt Frewer behind the scenes of Hercules. 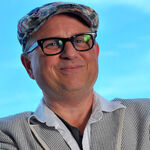 Bobcat Goldthwait speaks at the Misfits and Monsters panel at the 2018 Winter TCA Tour.