Disney Wiki
Register
Don't have an account?
Sign In
Advertisement
in: Characters, Characters introduced in comics, Elephants,
and 8 more

His mother
Bobo is a baby elephant who has appeared as a pet of Mickey Mouse in at least two stories.

Bobo was first featured in a self-titled storyline in the Mickey Mouse newspaper comic strip. In the story, Mickey mistakenly purchases Bobo at an auction. Eli Squinch, also making his first appearance in that story, convinces Mickey that he is Bobo's rightful owner. However, Eli actually intends to use Bobo to run his sawmill to save on electricity using a treadmill, which had already killed two horses. Mickey and Horace Horsecollar stall Eli's repossession of Bobo until the baby pachyderm discovers his mother is in a visiting circus. Bobo runs away and is reunited with his mother.

Bobo's first animated appearance was in Disney's 1936 short Mickey's Elephant. Here, he is given to Mickey by the Rajah of Gahboon, and Mickey spends much of the cartoon building a house for Bobo. However, it is ultimately destroyed by a jealous Pluto, having been convinced by his shoulder devil that Bobo is replacing him. Disney had planned to make Bobo into a recurring character, but nothing ever came of the idea. Storyboard sketches of a planned cartoon featuring Bobo, titled Spring Cleaning, were printed in the book Mickey Mouse: The Floyd Gottfredson Library - Volume 3: Showdown at Inferno Gulch.

His only other animated appearance since was a cameo in the Mickey Mouse episode "Safari, So Good". 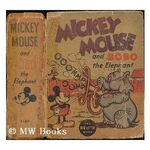 Bobo in his debut comic story

Bobo's cameo in "Safari, So Good"
Community content is available under CC-BY-SA unless otherwise noted.
Advertisement