Active
Bomb Voyage is a recurring antagonist in the 2004 Disney/Pixar animated film, The Incredibles. He was a longtime enemy of Mr. Incredible.

Brad Bird originally pitched the idea of Bomb Voyage's name. His original idea was that Bomb Voyage would be named "Bomb Pérignon" in reference to the similarly named champagne, Dom Pérignon, but the Moët et Chandon company would not allow that kind of parody.

Apart from his obviously evil and insane persona, Bomb Voyage is very sarcastic, mocking "Incrediboy" for trying to intervene on him.

Bomb Voyage is a recurring enemy of Mr. Incredible as he is introduced. He is a mime-like criminal who speaks French, although he can understand English as well.

When he is first introduced, Bomb Voyage crashes through a brick wall after stealing money. Just before Mr. Incredible could fight him, a young Buddy Pine (as "IncrediBoy", Mr. Incredible's so-called sidekick) arrived and tried to appeal to Mr. Incredible that he would be a worthy sidekick for him (and that he invented new rocket boots, which make him get around so fast). Mr. Incredible then told him, "Fly home, Buddy. I work alone" while Bomb Voyage agreed with him by insulting Buddy's "ridiculous" costume and calling him a "little oaf" (in French). Bomb Voyage then took advantage of the distraction to aid his escape. As Buddy flew off to get the police, Bomb Voyage put a bomb on his cape (unbeknownst to him), forcing Mr. Incredible to release Bomb Voyage in order to save Buddy. Bomb Voyage was presumably aware of Mr. Incredible's persona in that in a tight situation, he would choose saving people over apprehending criminals.

Bomb Voyage successfully made a getaway, and it is presumed that he remained at large for the remainder of the film. He was also partially responsible for the Anti-Super Legislation Act being enacted, as the bomb he placed on Buddy was later removed from his cape by Mr. Incredible and managed to land and detonate on a railroad bridge, which forced Mr. Incredible to stand in the path of the train to prevent it from going through the newly made hole in the tracks, which resulted in the passengers suing Mr. Incredible, and acting as the jury in his lawsuit trial, that eventually led to it being passed.

It is unknown what became of Bomb Voyage afterwards, and he is presumably still at large.

In the video game version, Voyage is the main villain for the first three levels of the game and he speaks English. In the last level he is involved in, he recreates the scene in the movie, placing a bomb on Buddy Pine's cape, forcing Mr. Incredible to save him. After this, he attempts to escape in a helicopter, and Mr. Incredible defeats him by throwing six bombs at the chopper, causing it to fly out of control and presumably crash, killing Voyage.

In the comic series, Bomb Voyage is recruited by Xerek to make the Eiffel Tower vanish with one of his bombs, and later meets Elastigirl and Mirage in person when they arrive to investigate, when he attempts to escape, Elastigirl follows him throughout Paris and eventually shakes Xerek's location out of him. Since it has been 15 years since his appearance in the movie, Bomb Voyage has aged significantly, with a potbelly and balding hair.

Bomb Voyage's cameo in Ratatouille as a street mime

The older Bomb Voyage in the Incredibles: comic book. 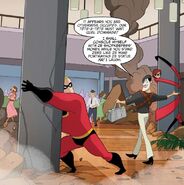 Bomb Voyage in LEGO The Incredibles