September 4, 1993 – February 23, 1994
Bonkers is an animated American television series that aired from September 4, 1993 to February 23, 1994, in first-run syndication (after a "preview airing" on Disney Channel). The syndicated run was available both separately and as part of The Disney Afternoon. The show was last seen in the United States on Toon Disney, but was then taken off the schedule in late 2004.

The premise of the series was that Bonkers D. Bobcat (inspired by Roger Rabbit), an anthropomorphic bobcat who was a popular cartoon star (he appeared in ''Raw Toonage'' shorts in the fictional world of ''Bonkers'' as well) had washed out of show business and became a cop. He was made the junior partner of Detective Lucky Piquel, a grim and ill-tempered stick-in-the-mud human cop who hates Toons. Throughout the series, the pair works together to solve crimes in the Hollywood, Los Angeles, California region. Bonkers repeatedly tried to win Piquel's praise, but usually just ended up ruining missions with his antics.

After several years of working with Bonkers, Piquel was given an F.B.I. job in Washington, D.C., and with great glee was finally able to leave Bonkers, but finally realized that after all the time spent hating working with Bonkers he had grown to love him. At the end of the "Lucky" episodes, Bonkers was given a new partner, the attractive Sergeant Miranda Wright. Although also human, she was far more patient and tolerant of his antics than was Piquel. With Miranda, Bonkers was more the brunt of the slapstick.

Contrary to popular belief, Bonkers was not originally conceived as a series based on Who Framed Roger Rabbit but was still inspired by the world of that film.[1]

Together with its predecessors DuckTales, Chip 'n Dale Rescue Rangers, TaleSpin, Darkwing Duck, Goof Troop and the successor Quack Pack, Bonkers is the last cartoon series dedicated to the popularity of Disney characters that mated with the new.

The series played 65 episodes, as part of The Disney Afternoon. They were not created in chronological order: The "Miranda" episodes were actually produced first, excluding the two-part series premiere, which featured Piquel and Bonkers meeting for the first time. This discrepancy becomes evident when observing the look of the main character in both sets of episodes. In the Raw Toonage shorts, Bonkers was orange with one brown spot, golf-club-like ears, and an undone tail. When the Lucky Piquel episodes (produced by Robert Taylor) were made, the character had a major overhaul: skinnier ears, two black spots on each his tufts, black Tigger-like stripes on his tail, and a different uniform. The Miranda Wright-era episodes (produced by Duane Capizzi & Robert Hathcock) use Bonkers's original look from Raw Toonage. The series also occasionally featured episodes of "cartoons" from Bonkers's pre-police actor days, all lifted from the Raw Toonage series.

The Raw Toonage shorts were an after-thought of production. While the Bonkers series was in pre-production, the Raw Toonage team, headed by Larry Latham produced 12 "He's Bonkers" shorts. These shorts were, in the context of Bonkers, explained to be some of the shorts Bonkers made at Wackytoons Studios before he was fired. The animated short entitled Petal to the Metal was originally shown in theaters in 1992 before the feature movie 3 Ninjas, while the rest were shown on the program Raw Toonage. In syndication, the shorts were collected into four full episodes with fillers of new material in between.

Meanwhile, Duane Capizzi, making his producing debut, was brought into the fold and teamed with animation veteran Robert Hathcock and charged with making 65 episodes (a full season's worth in syndication). The episodes theoretically would feature Bonkers with Wright as his partner. These episodes came back from overseas animation studios looking less than spectacular, causing considerable concern at Disney. Ultimately, the original team was replaced, and a team headed by Robert Taylor came in. Only 19 of the original order shows survived to air; they are what is known as the "Miranda Wright episodes" of Bonkers. Nine of these episodes being aired on the Disney Channel during the first half of 1993, as a preview for the series before its syndicated premiere in the fall. The 19 Miranda Wright episodes are shown toward the end of the series in the official continuity. Greg Weisman (co-creator of Disney's Gargoyles) worked on the "Miranda Episodes", and Bonkers' relationship with Miranda inspired Goliath's relationship with Elisa Maza.

Taylor threw out the old premise of the show. He replaced it with the Lucky Piquel scenario, but his episodes were revised and established to occur before the original episodes. 42 episodes of the "Piquel Era" were made, including one (New Partners on the Block), which attempted to bridge the gap between the two somewhat contradictory storylines.

The syndicated version of the series (which omits several of the original episodes that survived first-run) was last seen on Toon Disney, but after the addition of Jetix, it vanished completely off the network and has not been aired in the US since.

"New Partners on the Block" was a transition episode that showed how Bonkers went from having Lucky Piquel as a Partner to having Miranda Wright as his newest partner. The episode was much like the pilot episode/movie "Going Bonkers", using the CGI rain and bringing back the characters that were associated with Bonkers, those characters being Fawn Deer, Jitters A. Dog, and Grumbles Grizzly and, unlike the pilot, had more speaking and screen time.

At the end of the episode, Bonkers, along with Miranda and Lucky, captured the main villain, bomber Fireball Frank, thus making Bonkers and Miranda a team and giving Lucky a job as an FBI Agent in Washington, D.C. Piquel, his family Dyl (wife) and Marylin (daughter), Fall-Apart Rabbit, Toots and Broderick the Toon radio all subsequently relocated to Washington, D.C., allowing them to be written out of the show.

This episode was removed from the rotation in the United States after the 1995 Oklahoma City bombing due to its bombing/terrorist plot and was consequently never rerun on Toon Disney, even before Disney's stricter censorship policies following 9/11. (Another episode, "Fall Apart Bomb Squad", was also not shown on Toon Disney for similar reasons. However, both episodes have been rerun in Europe, especially in Italy.) However, it has since been reinstated on Disney+.

Bonkers was released on three VHS tapes in 1995 by Walt Disney Home Video, each containing two episodes. To date, no DVD release has ever been made.

On November 12, 2019, all 65 episodes of Bonkers were released on the Disney+ streaming service.

Bonkers has inspired three video games. The first one, released for Super NES, Bonkers (ボンカーズ ハリウッド大作戦!, Bonkers: Hollywood Big Operations! in Japan) was released on October 1, 1994 in North America and on January 3, 1995 in Japan. In the game, Bonkers is on his first case alone, and must retrieve the Toontown treasure of the Sorcerer's Hat (from Fantasia), the Mermaid's Voice (The Little Mermaid), and the Magic Lamp (Aladdin).

The second game, for the Mega Drive/Genesis on December 15, 1994, was also titled Bonkers. In the game, Bonkers notices that an Employee of the Month award will be given to a cop who captures 4 criminals: Ma Tow Truck (from the episode "Calling All Cars"), The Rat (from the episode "I Oughta Be in Toons"), Mr. Big (from the episode "Hamster Houseguest"), and Harry the Handbag (from the episode "In the Bag"). Since, Lucky is on vacation, Bonkers has to capture the crooks. This game and "Bonkers: Wax Up!" were released under the "Sega Club" label, a line of Genesis and Game Gear titles for kids.

The third game, for the Game Gear and Master System (Brazil only) was titled Bonkers: Wax Up!. Like the previous titles, the game was released on 1994. In this game, Bonkers has to escape from Madame Who-Said's Wax Museum and rescue Lucky in time.

Compared with previous Disney Afternoon shows (that were mostly well received), Bonkers for the most part got mixed reviews. Many felt that the premise of the show was too similar to the movie Who Framed Roger Rabbit to a point where it could be seen as a rip-off of the film. Bonkers' voice (supplied by Jim Cummings) was also considered to be annoying and irritating by audiences.

The show's reception was also highlighted by the Warner Bros. show Animaniacs which began to air around the same time that Bonkers did, and in certain episodes it would make fun of Bonkers, considering it an unfunny show. Ironically, Animaniacs had Steven Spielberg, who was also an executive producer on Who Framed Roger Rabbit, as executive producer and showrunner.

Despite this, the series currently holds a 6.9 rating from 907 users on IMDb.com. 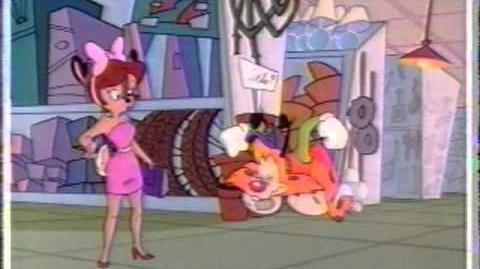 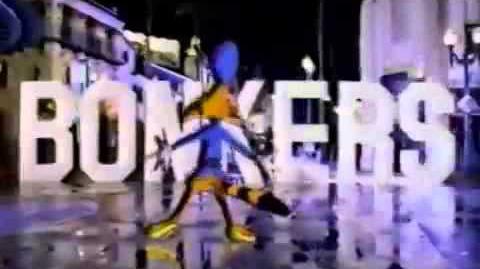 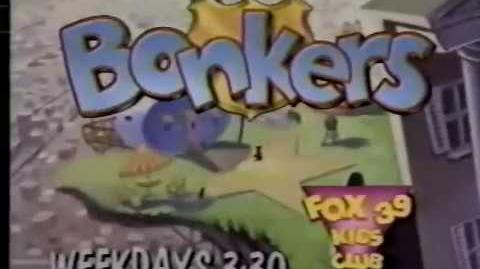 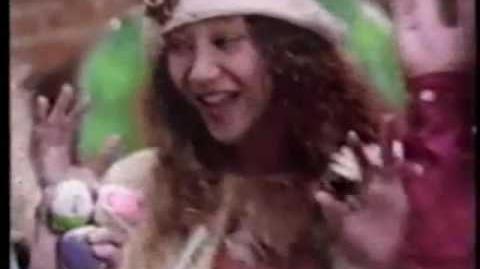 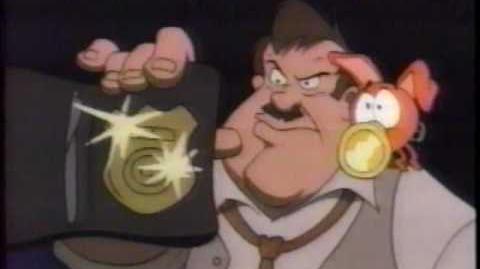 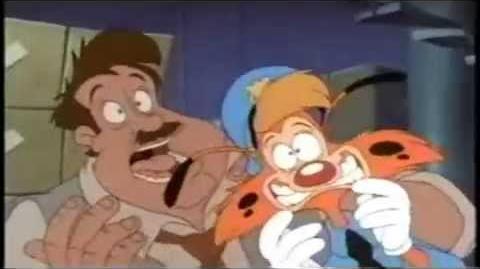 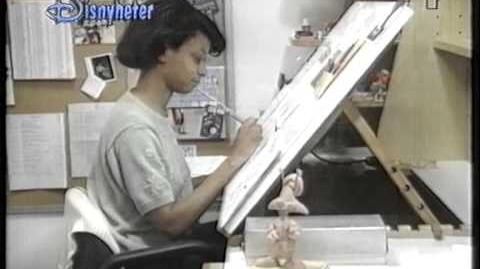