World of Color
Happily Ever After

The effects that night howlers have on animals, the big city, predators (mildly), danger

Judy Hopps (daughter)
275 unnamed children
Bonnie and Stu Hopps are a rabbit couple from Disney's 2016 animated feature film Zootopia. They are the parents of Judy Hopps and her 275 brothers and sisters.

Bonnie and Stu are resident rabbits in Bunnyburrow, raising their many children simultaneously with the family farming business. Stu is the more cautious of the two and tends to clings to dated depictions of predators, heightening his sense of protection around his children; Bonnie is more understanding of her children's decisions and not nearly as paranoid as Stu, though she is not any more progressive than Stu, either.

Bonnie and Stu, along with several of their children, watch their daughter Judy's community play based on the city of Zootopia during Bunnyburrow's county fair. After the play and returning to their carrot stand, the couple tries to sway Judy away from becoming a police officer when she grows older, as rabbits are not traditionally police officers, and encourage her to become a carrot farmer with the family instead. However, Judy voices her desire to make the world a better place by becoming an officer.

Judy eventually enrolls in Zootopia Police Academy years later and graduates as valedictorian of her class. At her graduation ceremony, Bonnie and Stu observe Judy being officially inducted, but also exchange looks of concern when they realize Judy's new job requires her to move to the city. At the train station, Bonnie, Stu, and the rest of Judy's family gather to say their farewells. Bonnie and Stu both express reluctance and acceptance for Judy in Zootopia, with Stu packing several fox-repelling items for Judy in case she runs into trouble with foxes, though Judy only agrees to take the fox repellent to keep her parents' worries low. At first, she gets on the train but rushes back to hug her parents and kiss their cheeks, assuring them that she loves them (and vice-versa), and Stu cries when she gets back on, but Bonnie tells him to pull himself together. Once in Zootopia, Judy is designated as a meter maid on her first day in the force, much to her dismay, and becomes disillusioned of Zootopia's perfection after she gets tricked by a fox herself. After returning to her apartment, Bonnie and Stu call her and learn what has happened, both becoming delighted that Judy is in a relatively safe position. However, they console Judy and remind her that being a carrot farmer is still an available option.

They keep in contact with Judy by phone, including one phone call later on that accidentally almost exposed Judy when she was spying on Mayor Lionheart for evidence. When the city is thrown into chaos between predators and prey, Judy, feeling guilty and ashamed for her part in causing it, resigns from the force and returns to Bunnyburrow, becoming a carrot farmer with her family. Despite having their daughter back, Bonnie and Stu notice how depressed Judy is and show her the good examples that have come out for predators: after being inspired by Judy, Bonnie and Stu partnered up with the fox Gideon Grey, Judy's former childhood bully, and his baking business. As Gideon apologizes to Judy for his past cruelty, some rabbit children run towards them for Gideon's pies. Stu immediately warns them to stay away from some violet flowers growing around their crops. When Judy asks what the flowers are, Stu explains that the plants cause severe psychotropic effects on animals, so he grows them to protect the crops from bugs. Gideon adds to this, mentioning that the plants are nicknamed "night howlers" by his family. Hearing this and having an epiphany, Judy takes Stu's truck to drive to Zootopia, leaving Bonnie, Stu, and Gideon bewildered over what got her so excited.

During the end credits, Bonnie and Stu are seen dancing together at a concert held by Gazelle, unaware that Judy is there as well with her friend Nick Wilde. 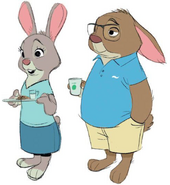 "You're not fine, your ears are droopy"

Stu telling his children to stay away from the Night howlers

Bonnie and Stu at Gazelle's concert

"Did you use the fox taser?"

"No one got eaten"

"You're not fine, your ears are droopy"