Her room in the human world

Randall, Having little Mikey taken away from her, Sulley's roar (formerly), the Scream Extractor

“Sulley, you're not supposed to name it. Once you name it, you start getting attached to it. Now put that thing back where it came from or so help me...!”
―Mike Wazowski[src]

Mary Gibbs, better known as Boo, is the tritagonist of the 2001 Disney•Pixar animated film, Monsters, Inc.. She is a young girl who is not scared of any monsters except occasionally Randall, who happened to be her monster. Boo eventually ventures though her closet to enter the monster world, where she develops a bond with Sulley and Mike Wazowski.

Boo is a two-year-old toddler who is curious and naïve. She can talk, but has gibberish vocabulary and little dialogue because of her age. The only actual words she says in the film are "Boo!", "Kitty!", and "Mike Wazowski!". In other ways, she is advanced for her age, such as already being potty-trained. This is seen when she shows to Sulley that she needs to go to the bathroom and does not need any assistance.

In the first film, Boo is a two-year-old human child who has escaped from her room from which Randall intended to kidnap her. Much of the film's plot follows what happens as Sulley and Mike try to get Boo back to her room safely.

When she first appears, Boo is very attached to Sulley (calling him "Kitty"), and she thinks he's playing with her, but he is not so keen, but as the film progresses, he develops a bond with her. To get Boo to her door without drawing attention, Mike and Sulley make a homemade monster costume (using chair-fabric for skin, desk lamps for eyes, and a mop for hair) to disguise her. Throughout the movie, Boo repeatedly wanders off, causing many comedic situations for Mike and Sulley.

At one point, Sulley, under Mr. Waternoose's orders, roars in front of a robot child used for simulation, not noticing that he has also scared Boo. Sulley tries to apologize to Boo, but she is too terrified of him and runs to cower underneath Waternoose's legs. Waternoose, who has caught sight of Boo, decides to "take care" of her before anything worse happens, only to reveal he is in league with Randall. After he and Randall banish Sulley and Mike to the Himalayas, they proceed with extracting screams from Boo by using the Scream Extractor. However, Sulley arrives just in time to destroy the device and free Boo.

Mike catches up with them, and they rush back to Scare Floor F, with Randall in hot pursuit. Randall chases them to a large chamber where thousands of doors to the human world are kept. Mike and Sulley then make Boo laugh to activate the doors, then they go through them, exiting the monster world and entering back into it to lose Randall and reach Boo's door. Just as it looks like Mike and Sulley have lost Randall, Boo suddenly slips off from Sulley's arms, and Randall reveals that he has caught her.

Sulley manages to catch up with Boo, but then Randall ambushes Sulley. Just as Randall is about to kill Sulley, Boo suddenly jumps on Randall and beats him up with a baseball bat. Boo has managed to overcome her fear of Randall. After Mike and Sulley banish him through another door, disable that door, and let it fall to the bottom of the chamber to ensure that he will never return, Boo blows a raspberry directed at the shattered door. They open Boo's door, only to realize that the power has gone out, but then, the door moves back to Scare Floor F, where Waternoose and the CDA agents are waiting. Mike runs off with Boo's monster costume as the agents go after him while Waternoose notices Sulley with Boo and her door and chases them to the simulation room, where he is lured into a trap set by Mike. Mike exposes Waternoose's plot to kidnap thousands of children (including Boo) to the agents, who then turn on Waternoose and arrest him.

Immediately thereafter, Roz revealed to be Agent 00001 of the CDA, enters and decides that Boo's door is to be destroyed after Boo is safely returned home in order to ensure that she will never come back to the monster world again. She lets Sulley have 5 minutes to say goodbye. Sulley takes her into her room and tucks her in after she shows him her toys, including Jessie the Yodeling Cowgirl from Toy Story 2, a ball from Luxo, Jr., and a clownfish that looks like Nemo from Finding Nemo.

Boo and Sulley take a seemingly one last look at each other, then after Sulley closes the door, Boo runs up to it and opens it to surprise him, only to find her closet instead and Sulley nowhere to be seen. After her door is shredded, Sulley feels sad that he will probably never see Boo again and keeps one of the splintered pieces from her door as a memento.

At the end of the film, Mike brings Sulley (now the new CEO of Monsters, Inc.) a surprise, which turns out to be Boo's door reassembled. The door becomes functional when Sulley places the piece he has kept, and he opens it to see Boo, who (although off-screen) recognizes him by saying, "Kitty!" This gives Sulley a surprised grin on his face as the film closes.

Boo does not make a physical appearance in Monsters at Work, but is indirectly mentioned in the pilot episode, as Mike is talking with Celia, she is the reason why Sulley and Mike initially got banned from Harryhausen's for life. Boo is also mentioned in the episodes "The Damaged Room" and "It's Laughter They're After".

Boo appears throughout the miniseries, though her largest part is in issues three and four.

In Issue 3, her Jessie doll is stolen by Sid Phillips (though he goes unnamed in the comic), who wants to steal toys from kids to try and spare them from what happened to him. He hides in Boo's room from Mike and Sulley, who have been pursuing him through the door system. After finding her toy has been stolen when he escapes, Boo goes angrily in pursuit, putting on her monster costume and helps Mike and Sulley find Sid in the Monsters, Inc. facility. Getting Jessie back, the monsters don't believe Sid's stories about living toys and send him back to the human world through his sister's door.

In issue 4, Sid, Waternoose, and Randall team up to get their revenge. A visit to Boo's leaves Mike, Sulley and Celia trapped. Boo stowed away and allows for a means to reactivate the door briefly, escaping with Celia back into the human world. Escaping the clutches of the pursuing villains, they end up leading them into another trap set up by the CDA to recapture the three. 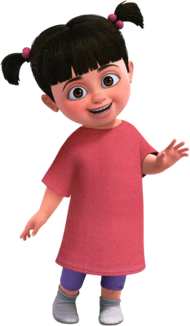 Boo is first seen playing with Sulley and Mike when Sora, Donald, and Goofy walk into the corporation lobby. Mike is immediately frightened, thinking the trio would react badly about having a human in their presence. To their surprise, the trio show no fear of the little girl. After a brief introduction, the group is attacked by a herd of Unversed. Worried that more would come, Sulley decides to take Boo home. However, the door to her world is transported elsewhere by the machines, forcing the six of them to traverse through the entire factory to locate it. Throughout the journey, Boo acts as an energy generator. Eventually, they run up to Randall, Boo's former scarer and a hard battle ensues between the team and a powerful Unversed. Once they come out victorious, they force Randall back through the same door. Back at the command center, they face off Vanitas. Sulley saves Sora by grabbing Vanitas from behind then throwing him through doors to multiple worlds. With everything settled, the five say goodbye to Boo.

In the ending credits, Mike finds a sleeping Boo in Sulley's arms.

The Disney Wiki has a collection of images and media related to Boo.