2004-present
Niles Allen "Booboo" Stewart Jr. is an American actor known for his role as Seth Clearwater in The Twilight Saga.

For Disney, he played Kai, Teddy Duncan's love interest in the two part Good Luck Charlie episode, "Sun Show". He also appeared as Carson Hunter, an old friend of the Wasabi Warriors in Kickin' It.

In 2015, he played the role of Jay, the son of Jafar, in the Disney Channel Original Movie, Descendants. He also plays Roman in Lab Rats: Elite Force and voices Jack O'Lantern in Spider-Man and Exile in Marvel Rising: Secret Warriors.

He appeared alongside his Descendants 2 co-stars singing the DuckTales theme in a YouTube video. 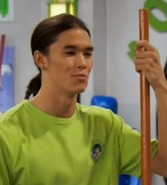 Jack O'Lantern
(Spider-Man)
Add a photo to this gallery

Booboo Stewart at premiere of Warm Bodies in March 2013.

Booboo Stewart arrives at the premiere of Descendants in July 2015.

Booboo Stewart promoting a Disney Channel Wand ID in May 2017.

Booboo Stewart attending the 2019 Radio Disney Music Awards.
Add a photo to this gallery
Retrieved from "https://disney.fandom.com/wiki/Booboo_Stewart?oldid=4021103"
Community content is available under CC-BY-SA unless otherwise noted.