Boomer is Emmie's football with a face from the Disney Junior series Doc McStuffins.

Boomer is happy, sweet and energetic, but he is somewhat scared when it comes to check-ups. In "Busted Boomer", Doc brings Boomer into the clinic and asks him if he would let her give him a check-up, and he agrees. When Doc takes his pressure, she calls his illness 'deflate-alosis', and tells her friends that unlike Boomer, who has air in him, Stuffy, Lambie and Chilly have stuffing. Boomer tries to leave the check-up room, but Stuffy stops him. Doc then finds a hole in him and puts a big round plaster on him. She then takes out her air pump with a needle, which terrifies Boomer. Doc tells him that he needs to have more air in him, and catches Chilly's attention while Boomer hops away outside. When the gang find him, Doc tells Boomer that she doesn't like needles either. When she had to get a shot with a needle from her doctor, she was always scared, so her Mom gave her a big hug, and as long as she was there, Doc felt brave enough to get the shot. Her friends give Boomer a hug while Doc fills him with air, to calm his nerves. By the time it's done, Boomer receives one more hug and bounces very high in the air. 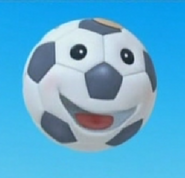