To turn people into dogs

“In Canis Corpore Transmuto”
―The inscription on the ring

The Borgia Ring is an enchanted ring with the power to turn a person into a dog and plays an important role in the original Shaggy Dog films.

There have been many different versions of the ring throughout the original films. From The Shaggy D.A. to The Return of the Shaggy Dog, it is an ancient Egyptian beetle talisman (aka a scarab) in the center that glows and has the inscription written on the back.

In the 1994 remake the ring is a bronze dragon holding an amber jewel in its wings and like the one with the beetle on it, it glows.

The ring once belonged to a ruthless woman named Lucrezia Borgia who cast love spells on men she liked and when she got bored with them, turned them into dogs according to the 1994 remake. In the original films, there are two paintings of Lucrezia Borgia wearing the ring and with a sheepdog beside her.

The ring accidentally ended up in the hands of Wilby Daniels. When he found it he read the inscription a couple of times and turned into a big shaggy dog. The curse on him often came and went but his chance of curing it forever would require an act of bravery which he fulfilled when he rescued a girl named Franceska from kidnappers.

The ring is a museum exhibit that becomes stolen and once again turns a now adult Wilby into a shaggy dog when someone reads the inscription. However the transformation only lasts for a couple hours.

The ring first comes in possession of Tim the Ice Cream Man and gives it as a gift to his girlfriend Katrina but loses it after being baked inside a cherry pie. It's recovered by the police and John Slade gains possession of the ring after his right hand man Raymond tells him about Wilby turning into a dog. Slade uses the ring to his advantage to eliminate Wilby and the more he reads the inscription the longer he stays as a dog. However against the warnings, when someone reads the inscription too often the reader would be turned into a dog himself and that's what happens to Slade when becomes a bulldog. 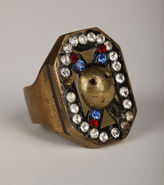 The ring that appeared in the original Shaggy Dog film 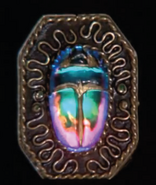 The ring that appeared in The Shaggy D.A. and The Return of the Shaggy Dog 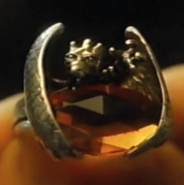 The ring that appeared in the 1994 remake

The painting of Lucrezia Borgia that appeared in The Shaggy D.A. and the 1994 remake 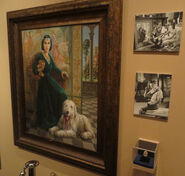 The painting of Lucrezia Borgia that appeared in The Shaggy Dog and The Return of the Shaggy Dog
Add a photo to this gallery
Retrieved from "https://disney.fandom.com/wiki/Borgia_Ring?oldid=3457274"
Community content is available under CC-BY-SA unless otherwise noted.