Good, later bad (in the beginning due to HEX)
Bad, later good (in the finale)

In the game's introduction, the Bots are like Cast Members. However, the Bots get taken over by HEX and try to destroy the guests. In the finale, they are seen playing instruments in the song It's a Small World and there are videos from the start of the worlds of them being mischievous.

Role in the video game

At the start of each location, a video of the Bots misbehaving is seen. During the levels, the bots appear often and fight the players. They are like no other video game villain as they actually move objects that players need and seem to think for themselves. Throughout the game in certain areas, Bots can sometimes build traps to slow down the player from progressing to complete the level such as spike traps, walls, and turrets.

The Bots in each world wear costumes corresponding to the movie that the world is based in. To unlock all Bot costumes, you must collect all collectibles in all levels of every hub. You can get a closer look at the Bot with its world costume.

The Bots look different for each world but are all based on these Bots:

There are two types of Fodders, one that walks and others that fly and shoot projectiles.

Standard Fodders are usually the common Bot in the game. In addition to attacking with their hands, they can use weapons like the tools that the player use and ranged weapons like ray guns and rifles. They can also move important items and build traps like spikes, cannons, and barriers to slow down the player from progressing. If you see the gear icon, you must attack the Fodders to prevent them from building the traps.

Flying Fodders usually, fly and shoot projectiles at you or swoop at you. If you attack the Flying Fodder, it will lose some of its wings.

The Brute is large and bigger than the Fodder. These enemies will try to crush you or grab you with their hands. They are the weakest mini-bosses in the whole game.

The Roto has a large wrecking ball-arm that it spins extremely fast. The player must avoid this Bot and then attack it. When you see a button icon, press it and attack it while stunned.

The Bulldogs are Bots looking like giant dogs and sometimes try to eat you. These Bots are much aggressive than Brutes. The Bulldogs are able to catch you and you must avoid this attack.

The Spawner, as its name suggests, can shoot extra Fodder and fireballs from its cannon arm. The fireball will cause an instant death, so it is best to deflect it carefully or avoid it. 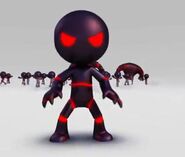 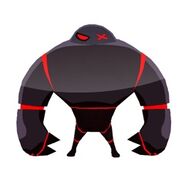 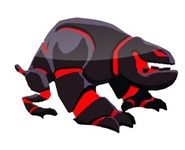 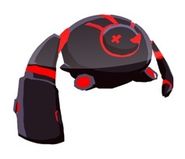 Before being under control of HEX

Add a photo to this gallery
Retrieved from "https://disney.fandom.com/wiki/Bots?oldid=3931181"
Community content is available under CC-BY-SA unless otherwise noted.